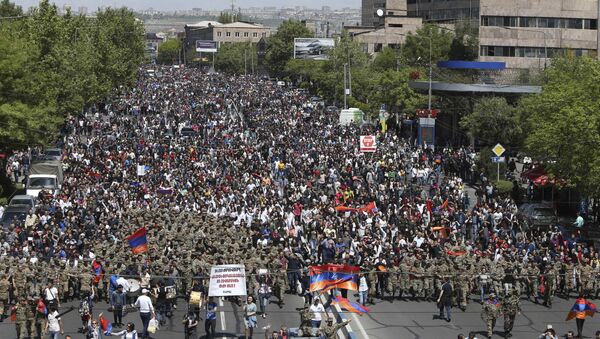 © REUTERS / Vahram Baghdasaryan/Photolure
Subscribe
MOSCOW (Sputnik), Sofya Grebenkina - Anti-government protests are set to be a trend in the future of Armenian politics, as voters see this as a legitimate way to curb abuse of office, but constitutional reform of the prime ministerial post will unlikely follow, experts told Sputnik on Thursday.

On Wednesday, Armenian First Deputy Prime Minister Karen Karapetyan proposed a snap parliamentary election, following ex-Prime Minister Serzh Sargsyan's resignation and failure of negotiations with the opposition on the transition of power. The opposition said it would boycott the snap vote to prevent the ruling Republican Party of Armenia (RPA) from staying in power.

Armenians Clean Up Yerevan's Central Square After Days of Protests (VIDEO)
Protests in Armenian broke out on April 13 after ex-President Serzh Sargsyan was nominated as the country's prime minister. The nomination was largely regarded as an attempt to stay in power after Sargsyan had served two terms as the country’s president since the newly amended constitution transferred some of the presidential powers to the head of the government.

On Monday, Sargsyan resigned amid large-scale anti-government protests. Karapetyan became acting prime minister. In his Monday resignation statement, Sargsyan made clear that he had made a mistake in undertaking the office of prime minister.

"[Protest leader] Nikol Pashinyan was right. I have made a mistake. In this situation, there are several solutions, but I will not resort to any of them. It is not for me. I leave the position of the head of our country," Sargsyan said.

Protests resumed on Wednesday in the country’s capital Yerevan, along with Gyumri and several other cities, as the opposition demanded the RPA, which has a majority in parliament, to surrender the government and elect opposition leader Nikol Pashinyan as prime minister pending new elections.

The speaker of the parliament, Ara Babloian, announced on Thursday that a special parliamentary session will be held on May 1 where lawmakers will be able to choose the country’s next prime minister.

Emil Sanamyan, an independent analyst on the Caucasus region said that large-scale protests could become a method for the electorate to express its dissatisfaction with leaders of the country who they perceive overstep their office.

"This is very hard to predict, but certainly this large-scale protest sets a precedent. If the current process comes to a peaceful and successful conclusion, it could be repeated in the future in Armenia should other leaders violate basic principles of governance," Sanamyan said.

Dr. Laurence Broers, an associate fellow of the Russia and Eurasia Program at the Chatham House think tank, said that Armenians had previously also resorted to protests to display dissatisfaction with their government.

"But over recent years Armenia has developed an impressive repertoire of civic resistance to authoritarian rule," Broers said.

Russian Diplomats Discuss Political Crisis in Armenia with Protest Leaders
However, Broers made the contrast between the violent protests in support of Armenian military commander and opposition political activist Jirair Sefilian undertaken by the Sasna Tsrer group in 2016, and the peaceful protests this month. He added that leaders of the country will remain aware of the Armenians’ predisposition for political participation in the form of protests in the future.

Broers stated that after protests had been quelled in the country, a new legitimate source of power facilitated by the election was needed.

"There will … be snap parliamentary elections now, which should channel the surge of protest politics into institutions. This is very important: what is needed now is a new legitimation of power, based on free and fair elections," Broers said.

On December 6, 2015, 63 percent of Armenians voted in a constitutional referendum, which put the country on course to a parliamentary republic. The amendments that came into force in 2018 extended the executive powers of the prime minister and made the president into a ceremonial figure.

Sanamyan stated that as the amendments have just taken effect, there is no indication that additional constitutional reform could take place despite Sargsyan leaving.

"This is not being discussed in Armenia at this point. The new constitutional system was only just introduced and has yet to prove itself in practice," Sanamyan said, answering a question on whether the resignation of Sargsyan will lead to constitutional reform.

Broers added that an engaged citizenry was critical to spurring political reform in Armenia rather than constitutional reform, which would be complicated to achieve.

"It still looks as though the enactment of any more constitutional reforms would depend on some complicated and hard-to-achieve coalition politics… The basic point here is that constitutions in Armenia have come and gone. The best curb on unlimited prerogative power is an engaged citizenry, active civil society and a free media," Broers said.

Broers noted that the new parliamentary system was designed to facilitate more institutionalized politics, rather than personality-based politics.

However, Broers stated that it was necessary now for the implementation of the constitutional amendment to the post of prime minister to be implemented in a way that safeguards the office’s power from abuse through state-building.