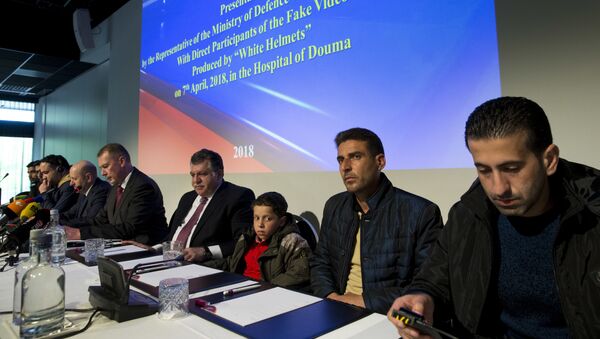 An 11-year-old Syrian boy, whom the White Helmets NGO used in their video about a "chemical attack" in Syria's Douma on April 7 in exchange for food, and his father, who has also denied that any attack took place, have spoken before journalists.

Moscow's delegation to the Organization for the Prohibition of Chemical Weapons (OPCW) is holding a press briefing in The Hague on April 26.

Head of the Russian delegation Alexander Shulgin said that Moscow views the alleged chemical attack on April 7 as a provocation, something it warned about in advance. He added that Russia will not allow new provocations such as this against Syria.

He noted that the only evidence is a "sloppily staged" video shot by a pseudo-humanitarian organization, the White Helmets, and was intended to "touch hearts." The same strategy as in previous false flag attacks.

Shulgin remarked that none of the representatives of the countries that committed the attacks are present at the press conference because they are afraid to look into the eyes of the young Syrian boy who witnessed the fake video from the White Helmets being shot and understand their wrongdoings. He also told reporters that the US envoy to the OPCW had gone to great length to convince American allies not to take part in the Russian press briefing.

Russian General Igor Kirillov, participating in the conference, showed footage from apartments that were allegedly fired at with chemical armaments. The video shows yellow cylinders that remained undamaged, which is, according to the general, highly unlikely if they were dropped from above. The general also noted that marks were discovered on the floor, suggesting that the cylinders were dragged there. He added that Russian investigators had found residents of the ground floors of one of the buildings who breed chickens; they claimed that their birds were all healthy and alive.

Hassan Diab, the little boy who participated in the White Helmets' filming of the so-called proof of the chemical attack, said during the conference that he and his mother were in the basement when they heard shouts calling on everyone to go to the hospital. There, he and his mother had cold water poured over them by unknown people and were released.

A doctor from the Douma hospital, also participating at the conference as a witness, said that what happened on April 7 is not corresponding with what was shown in the media. People were arriving at the hospital suffering from asphyxiation, not from a chemical attack. This was due to smoke inhalation from a nearby building that had been bombed. According to him, medical personnel were treating them when the White Helmets came in, claiming that there had been a chemical attack. He saw them creating hysteria in the hospital, but didn't believe them, as none of the staff saw signs of chemical poisoning. According to him, all their patients went home the same day.

Another witness, Abdurahman Hijazi, a resident of Douma, a freelancer and ordinary citizen said he had breathing trouble due to smoke from the nearby bombed building. He saw people coming to the Douma hospital claiming that they were from "civil protection," bringing others who, they claimed, were suffering from a chemical attack. When Hijazi saw these people, he thought that they were fine, as there were no signs that they were suffering. Nevertheless, according to him, people from the "civil protection" started to create hysteria in the hospital, shouting about chemical attack.

Another witness, Said Daaz, from the Douma Hospital Laboratory, was working on April 7, when he heard shouting. He went to see what was going on and found the floor doused with water and packed with frightened people. He also saw people outside shouting about a chemical attack, but all Said Daaz could smell was ordinary smoke.

Muvaffak Nasrim, a paramedic from the hospital's emergency care department, said that people who had suffered from recent airstrikes, who were suffering from respiratory problems, began to arrive around 7p.m. on April 7. He said that somebody brought a young girl to the hospital claiming that she was suffering from a chemical attack. Muvaffak Nasrim said that he examined her, but that she showed no signs of chemical poisoning. She was released from hospital the same day.

READ MORE: Syrian Doctor Reveals Why There Was No Chemical Attack in Douma

Another witness of the filming of the White Helmets' staged video, Jassim Al-Majid, a surgeon at the Douma hospital, said that he was working there the same day the alleged attack took place. According to him, many people were arriving with wounds from hostilities and shelling on that day. Specifically a girl was brought in by a group of people who claimed that she was suffering from a chemical attack. According to Jassim Al-Majid, her body temperature was very low and she was all wet. He was surprised by the claims, as after he examined her body extensively he found no symptoms of chemical weapons' exposure. He covered her in dry blankets and she was released the same day from the hospital.

When asked about possible pressure put on witnesses present to testify in favor of Bashar Assad, the administrator of the emergency ward at the Douma hospital said that there were was no such pressure.

"This is a very strange question, we came here not because we were under pressure. Nobody told us what to say, we came here to tell the truth," the medical official said.

Shulgin expressed confidence that after this conference, nobody will doubt "who is spreading fake news, and who is telling the truth."

He noted that OPCW technical experts have questioned six witnesses out of seventeen arriving to the Hague to testify, who deny the claims of the chemical attack taking place in Douma on April 7.

Shulgin denied allegations by UK representatives to OPCW that the press briefing could undermine the organization's mission. He added that OPCW experts have been at the site of the alleged attack twice, they know what they want to visit and whom to question and that the briefing can't inflict any damage to their work.