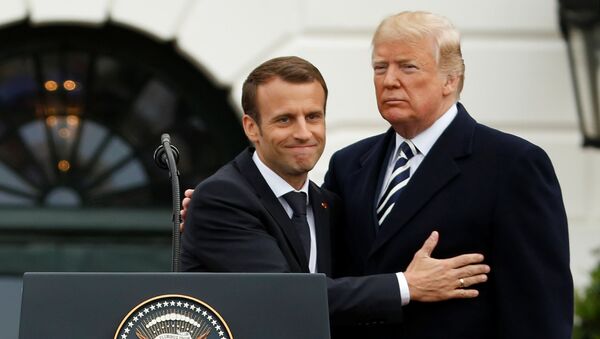 French President Emmanuel Macron has emerged nothing short of an "EU speaker" during his three-day visit to Washington, Russian academic Gevorg Mirzayan noted, adding that the French president’s shuttle diplomacy has yet to bear fruit.

It appears that French President Emmanuel Macron has found the way to Donald Trump's heart, Gevorg Mirzayan, an associate professor at the Department of Political Science at the Finance University of the Russian Government, noted in his op-ed, shedding light on how the French leader may capitalize on this personal chemistry.

There are certain grounds for a US-French rapprochement, the academic believes: First, the two leaders were initially seen as outsiders during the presidential race; second, in contrast to German Chancellor Angela Merkel, Macron has never lambasted Trump; third, as Foreign Policy magazine remarked, the US has a relatively small trade deficit with France, let alone Paris's spending over 2 percent of its GDP on NATO — to the satisfaction of Washington.

"Naturally, the French president is making every effort to monetize his status," Mirzayan said, suggesting that his relationship with Trump has already provided a certain benefit to Macron.

"There is nothing that flatters Gallic pride more than a French president on the global stage, alongside the leader of what remains the world's most powerful country," as The Guardian, a British daily newspaper, noted.

Friendly Fire: How Trump's Crackdown on Russia, Iran Backfires on Europe
According to Mirzayan, Macron could negotiate at least four global issues with Trump, serving as a sort of European broker.

First, it's an issue of the additional tariffs imposed by Trump on steel and aluminum imports in March 2018. It was reported that while holding talks with his American counterpart, Macron asked Trump not to extend the protectionist measure to the Old Continent, providing it instead with permanent exemption from the new tariffs.

Second, the Iran nuclear deal, also known as the Joint Comprehensive Plan of Action (JCPOA) reached on  July 14, 2015, between Iran, the P5+1 and the European Union, remains one of the most burning issues for the EU as Trump is about to withdraw from it.

Macron's Dangerous Trump Bromance
Once the deal is ripped up by Washington, the EU would find itself on the horns of a dilemma: whether to adhere to the US anti-Iranian sanctions policy and lose billions of euros invested in the Iranian economy or oppose the White House and reap a bitter harvest of confrontation with the US.

Macron believes that a mutually-beneficial compromise could be reached on the issue. Addressing the US Congress, he emphasized that France will not leave the nuclear deal.

However, at the end of his visit to Washington, the French president suggested that Trump "will get rid of this deal on his own, for domestic reasons."

Third, Paris tries to persuade Washington to stay in Syria. Earlier, Trump has repeatedly reiterated that he wants US troops to return home as soon as possible.

"I would love to get out. I would love to bring our incredible warriors back home," Trump said during Macron's visit. However, the US president added: "But I want to come home also with having accomplished what we have to accomplish."

Macron: Trump Will Exit Iran Nuclear Deal in May
For his part, the French president vowed to increase the country's military presence in Syria and back the US military servicemen in the country's north, during a press conference at George Washington University on April 25.

"Your president [Donald Trump] said he would stop the involvement of US troops as soon as the war against Daesh [ISIS/ISIL]* is completed. We're in the same position… Our willingness is to be totally committed in this war against ISIS, no more than that," Macron stated.

Previously, France took part in the joint missile strike on Syria together with the US and the UK on April 14. The coalition fired about 103 missiles, 71 of which were successfully intercepted by Syrian air defense systems. The attack was presented as a response to the alleged use of chemical weapons in Douma, Eastern Ghouta, groundlessly blamed on Syrian government forces.

Fourth, it is possible that Macron could become a mediator between the US and Russia, Mirzayan suggested.

German Chancellor Angela Merkel cannot play this role, as she has spoiled relations with both Trump and President Vladimir Putin, the academic presumed.

"It is no coincidence that [Macron] has not canceled his visit to the St. Petersburg Economic Forum, despite the Skripal [poisoning] case and hysteria over a fake story about a chemical attack in Douma," the contributor pointed out, suggesting that it is possible that the French leader would hand the Russian president a message from Trump and receive a reply message during his visit to Russia.

Only time will tell what fruits Macron's shuttle diplomacy will bear for the EU, Russia and the whole world, the academic concluded.

French President Emmanuel Macron's official visit to Washington lasted for three days starting on April 23 and ending on April 25. The French president held talks with Trump, including a one-on-one negotiation, delivered a speech to the US Congress and at George Washington University.