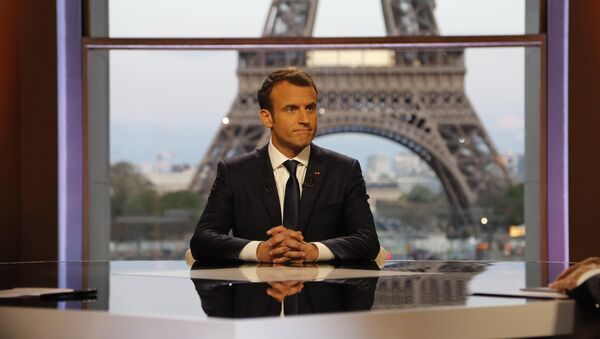 © REUTERS / Francois Guillot/Pool
Subscribe
WASHINGTON (Sputnik) - French President Emmanuel Macron in a speech beore the US Congress pledged France’s commitment to work with the United States to restrain Iran’s nuclear ambitions through a comprehensive deal in addition to finding a political solution to the crisis in Syria.

Macron delivered a speech to a joint session of the US Congress on Wednesday amid a three-day official state visit for talks with President Donald Trump. During the address Macron made it clear that he had a different attitude towards the Iran nuclear agreement — formally known as the Joint Comprehensive Plan of Action (JCPOA) — than his American counterpart.

In July 2015, Iran signed the JCPOA with the European Union and the P5+1 group of nations — the United States, Russia, China, France and the United Kingdom plus Germany. The agreement stipulates a gradual lifting of sanctions imposed on Iran in exchange for Tehran maintaining the peaceful nature of its nuclear program.

Macron: France Will Not Leave Iran Nuclear Deal
Trump has repeatedly criticized the JCPOA — negotiated by his predecessor US President Barack Obama — and has threatened to withdraw the United States from the agreement if it is not amended. On May 12, Trump is expected to announce whether he will extend US sanctions waivers for Iran under the JCPOA.

Macron has been a supporter of keeping the pact intact while arguing the United States should remain as a signatory if there is no alternative mechanism.

On Tuesday, during a joint press conference, the French president urged Trump not to "tear apart" the Iran nuclear deal, but instead build upon it to develop a broader agreement.

Macron said during his speech to US lawmakers that France will not withdraw from the JCPOA, but is willing to work to improve the deal.

Iran should never possess nuclear weapons because such a development would put the international community at risk, the French president added.

Macron suggested that while the agreement may not address a variety of important concerns, the signatories should not abandon the deal before having something substantial to replace it.

Other signatories have called on the United States to comply with the nuclear agreement's provisions, saying the deal had yielded results and was non-negotiable.

Another global security concern Macron addressed was the situation in Syria, devoted to the defeat of the Islamic State terrorist group (IS, banned in Russia) while helping provide short-term and long-term solutions for the country's citizens.

France joined the United States and the UK in launching missile strikes against the Syrian government earlier in April in response to an alleged chemical attack that the Russian Defense Ministry said was staged, with British assistance, to justify intervention.

Macron Says France Will Increase Support to Coalition in Syria
During Wednesday's remarks, Macron said the United States and France will work together towards providing a humanitarian solution to the ongoing conflict in Syria in addition to helping facilitate a lasting political solution.

"We will together work for humanitarian solution on the short term, on the ground and contribute actively to a lasting political solution to put an end to this tragic conflict," Macron said.

In a separate speech at George Washington University on Wednesday, Macron said he shares Trump's intention to withdraw troops from their respective countries once the mission to defeat IS in Syria is completed.

But he went on to say that France needed to "fix" the situation on the ground to help the Syrians build an inclusive society and prevent other terrorist groups from thriving on the frustrations of the people.

Macron said France became part of the US-led coalition operating in Syria because the French have been targeted by IS terrorists on their own soil. He said the 2015 attacks in Paris, which killed 130 people, were organized from the Syrian city of Raqqa.

Macron also stressed the importance of the global community takng action in critical times to protect international institutions like the United Nations and NATO because a lack of action would result in them not being able to exist. He also outlined specific contributions to the fight in Syria that France is willing to offer.

"We are fully committed, and we will continue and increase our commitment within the framework of the international coalition," Macron said in a briefing on Wednesday evening in Washington. "What I am committed to doing in cooperation with Americans is to provide support to the American presence in the north of Syria and in particular east of the Euphrates river."

Macron also suggested that a small group of countries work together to close the gap between the Geneva and Paris processes.

"Our willingness is for this new small group to create a bridge between the Geneva process and the Astana process to have a discussion encompassing all the allies of the regime and to open a line with Russia and Turkey," Macron said during a press conference at George Washington University.

"I am sure one day the United States will come back and join the Paris agreement," Macron said.

Macron's Dangerous Trump Bromance
In response to changes in US trade policies, Macron said he believes international trade disputes can be resolved by negotiating via the World Trade Organization according to its rules.

Macron said that engaging in a commercial war is not consistent with France's mission to preserve global security, adding that global trade disputes will lead to price increases and the loss of jobs.

The French president in his speech to the US Congress also emphasized that the United States and France both need free and fair trade.