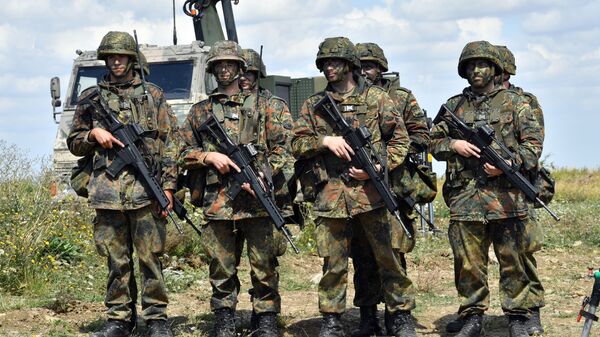 Germany's military, known as the Bundeswehr, plans to spend hundreds of millions of euros on new weapons. It will be spent on upgrading Germany's Puma tanks and maintenance of NH90 helicopters. In addition, a nine-year contract to lease Heron TP drones from Israel amounting to nearly one billion euros is reportedly in the works.

Sputnik discussed the German Bundeswehr's plans for a massive military upgrade with German MP, Steffen Kotré, from the Alternative for Germany (AfD) party.

Sputnik: What are your thoughts on this new plan on spending and upgrades for the German army? How necessary is this at this time? And how supported is this move by the German public?

Steffen Kotré: It's very, very necessary. In the last couple of months we have been confronted with very worrying facts about the Bundeswehr, with some of the most embarrassing headlines are that we don't have enough tents for our soldiers and we can't afford proper clothing for their missions. All of our submarines, in fact, none of them are working properly, also the tanks, aircrafts and helicopters don't run properly; so, to summit up, the situation of the Bundeswehr is more than unsatisfying. The government seems now to be willing to correct some of the mistakes of the past and that's a very welcome development which we are going to support. However, we know that Merkel and her past cabinets are responsible for the terrible condition that the German military is in today.

Sputnik: You said these were actually scandalous newspaper articles or media coverage that said that you don't have enough tents or there's a problem with clothing, a lot of the military equipment is in terrible condition, when did this start coming out? Was there really quite a lot of public outrage about this?

Steffen Kotré: Many, many times before we saw the situation. We are the opposition and we spoke about it all the time, and this year about six months ago as well.

Sputnik: Has Angela Merkel been blamed? Do you think this has affected her popularity?

Steffen Kotré: You have to know that the Bundeswehr is not respected by the German public like in other countries and so you can't say it's popular, so I think Merkel is blamed more on other issues but not this, the ministry of defense is blamed and I would say this is a very, very big mistake.

The views and opinions expressed by Steffen Kotré are those of the expert and do not necessarily reflect those of Sputnik.