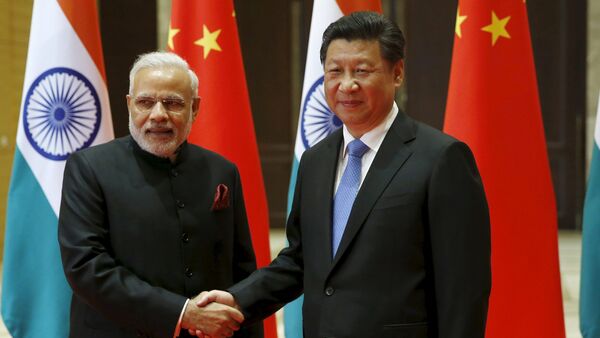 The foreign ministers of Kazakhstan, Kyrgyzstan, Pakistan, Russia, Tajikistan and Uzbekistan have confirmed their support for the Chinese Belt and Road project, while India's absence in the document has raised questions. Although it may seem that the two countries have failed to sort out their differences, their relations have actually been positive lately, Andrei Volodin, an expert at the Institute of Contemporary International Studies at the Diplomatic Academy said in an interview with Sputnik.

"It is worth mentioning that India has toned down its criticism of the Chinese Belt and Road project. Of course, India couldn't have supported it in Beijing [at the SCO meeting], as such a rapid and radical change in India's position […] would be seen not only in India, but also by the rest of the world as a capitulation to China," Volodin said.

At the same time, notes the scholar, the positions of the two countries are gradually getting closer, while the Belt and Road initiative is a subject for negotiations, as China is not pressuring India into actively participating in it.

Volodin believes that India was excluded from the final informative statement of the SCO so that it would still take place without putting pressure on India. Yang Mian from the Chinese Institute for Mass Communications doesn't think this is going to be a diplomatic scandal that will hurt the upcoming China-India summit.

"One of the important tasks for Narendra Modi is the development of the Indian economy. China is the second largest economic power in the world, as well as India's neighbor. That's why India, which wants to develop its economy, needs good relations with China. Moreover, considering the Indo-Pacific strategy and the Quadrilateral Strategic Dialogue (QSD), China is hoping to break this "siege" by improving its relations with India," Yang Mian said.

India remains skeptical about the Belt and Road initiative, believes Yang Mian. He thinks its key fear is that the China-Pakistan corridor will cross through the disputed Kashmir, currently controlled by Pakistan, thus posing a threat to its territorial integrity.

Yang Mian points out that in any case, the Indian foreign minister attending SCO wasn't authorized to change the official stance on the Belt and Road initiative. He adds that the only way to resolve this issue is an agreement between the two heads of state, something that will take time.