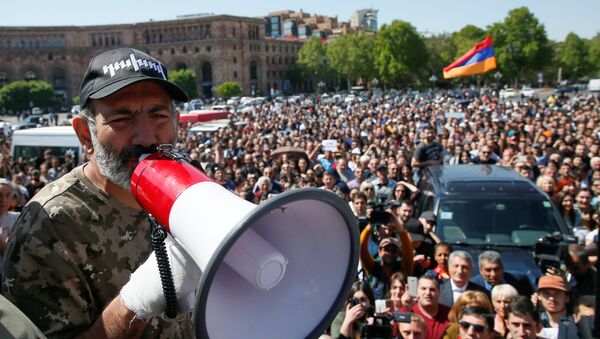 "They want the election to be held with the acting prime minister representing the RPA. We have known how these elections will turn out since 2017 … We can boycott these elections, only not passively, but by blocking access to the polling places and by preventing the RPA revival," Pashinyan said in his Facebook address.

Pashinyan also announced on social media that he had met on Wednesday with the EU diplomats based in Yerevan, and would soon hold talks with the Russian and US ambassadors.

The opposition intends to choose a "people's candidate" for the post of the country's prime minister at a rally later in the day.

"In the evening, at the rally that will begin at 19.00 [15.00 GMT], we will choose a people's candidate," Pashinyan told reporters during the march of protest.

After that, the candidacy will have to be supported by the parliament to observe all legal procedures, Pashinyan added.

World
US Urges All Sides in Armenia to Engage Constructively on Transition of Power
He believes that if the parliament is dissolved, the prime minister and the interim government will still be appointed.

"Their main task is to prepare early elections," he said.

Pashinyan said that "no one forbids" the ruling Republican Party of Armenia headed by Serzh Sargsyan, who resigned from the post of Prime Minister after opposition rallies, to take part in the elections to the parliament if they are scheduled.

"No one forbids the Republican Party to participate in fair elections," Pashinyan told reporters.

Earlier in the day, acting Prime Minister Karen Karapetyan proposed a snap parliamentary election, following the voluntary resignation of his predecessor and ex-President Serzh Sargsyan, and failure of negotiations with the opposition on the transition of power.

Commenting on the situation, the Russian Foreign Ministry said that Moscow was hoping that the current political situation in Armenia would be resolved solely by legal, constitutional means, and all political forces would show readiness for dialogue.

"We hope that the situation will develop exclusively in the legal, constitutional field, and all political forces will show responsibility and readiness for a constructive dialogue," the ministry said in a statement.

The protests against Sargsyan's premiership in Armenia started on April 13. Sargsyan, who served two five-year consecutive terms as president before being nominated as prime minister, was accused of trying to get around presidential term limits since the 2015 constitutional amendments transferred governing powers from the president to the head of the government.