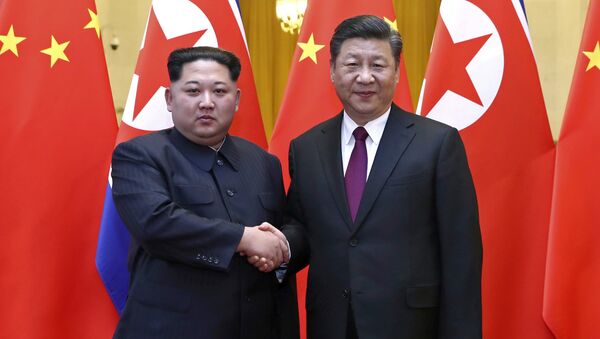 Two groups of Chinese researchers have reportedly confirmed a risk from radioactive exposure to their countrymen after a North Korean nuclear test site appeared to have partially collapsed.

North Korea's Mount Mantap has contained every known nuclear test in the country: the Punggye-ri nuclear test site sits under it in a network of tunnels. After a thermonuclear device was tested in early September 2017, seismic activity at the mountain was recorded in the form of a 6.3-magnitude earthquake, according to the US Geological Survey's findings, while the China Earthquake Networks Center detected a 3.4 magnitude follow-up quake.

Almost immediately, it was reported that the mountain had experienced a tunnel collapse, although with some uncertainty. Now, the Hong Kong-based South China Morning Post reports that Chinese researchers have confirmed that the mountain collapsed on itself. Wen Lianxing, a geologist at the University of Science and Technology of China in Hefei, led a team that reportedly studied 2,000 seismic stations for their data. Their research is expected to be published in the coming months in Geophysical Research Letters. "It is necessary to continue monitoring possible leaks of radioactive materials caused by the collapse incident," a statement from Wen's team said.

Another research team reportedly confirmed the blast had created a chimney that could potentially leak radioactive materials. Liu Junqing, a researcher at the Jilin Earthquake Agency wrote in a paper in the Geophysical Research Letters last month, "rock collapse… was for the first time documented in North Korea's test site."

The test "turned the mountain into fragile fragments," the newspaper reported, citing researchers.

Guo Qiuju, a Peking University professor who sat on a panel that has advised the Chinese government on how to respond to radioactive hazards, told SCMP on April 25 that "so far we have not detected an abnormal increase of radioactivity levels," but that they are continuing to monitor the mountain.

Before 2017, the mountain's surface did not show any signs of visible damage, the paper said. However, North Korea only conducted one nuclear test in 2017, while it tested two nukes in 2016 and three others prior. The country's first and weakest nuclear test in 2006 generated a 4.3 magnitude quake. Six nuclear tests were done at the Punggye-ri site.

Satellite images from 38 North, a North Korean news analysis website affiliated with the US-Korea Institute at the School of Advanced International Studies at John Hopkins University, indicate significant damage at the site. Nonetheless, the website reports that "North Koreans quickly restarted tunneling at the West Portal, which seemed to slow down in early April," while activity at other tunnel portals and command centers remained low.

An unnamed member of one of the Chinese research teams cited by SCMP reportedly told the paper that the collapse could be "why North Korean leader Kim Jong Un declared on Friday that he would freeze the hermit state's nuclear and missile tests and shut down the site," the paper reported.

38 North, meanwhile, says activity around Punggye-ri "may be the first visible indication that North Korea intends to cease further tunneling," but that it's too early to even tell whether the North Korean leader actually intends to shut the site down before more satellite images are taken.