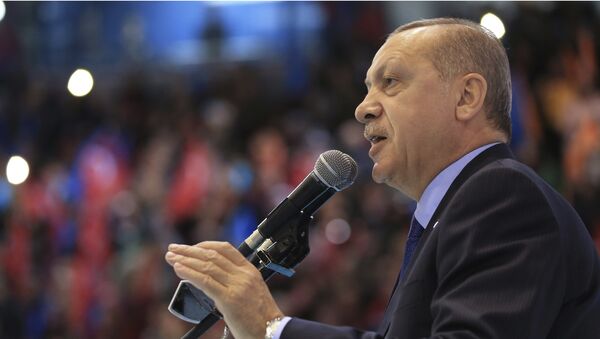 In his interview with Sputnik, political observer Mehmet Ali Güller emphasized that in addition to domestic factors, the reasons for this decision are connected with US military actions.

"The decision to call snap elections arises not only from problems within the Justice and Development Party (AKP) and the Nationalist Movement Party, but it is directly related to US military plans. There was a similar situation in the past, which Bahçeli had also served as a catalyst for. In 2002 when the US had been elaborating their plans [for the] Iraq intervention, Bahçeli had called for early elections as a result of which the AKP came to power on November 3, 2002," Guller told Sputnik.

Turkey's Gold Repatriation 'Sign of Coming End' of US-Dominated Monetary System
"At that time the new government overturned the decision of the former cabinet not to open the northern front for the US and thereby tried to open our northern gates for America. The similar situation is observed now. Bahçeli has called for early elections precisely at a time when the US, Britain and France began to elaborate and implement their military actions plan against Syria. Bahçeli suggested holding elections on August 24, but President Erdogan insisted on an even earlier date, June 24," he added.

The expert referred to March 1, 2003, when the Turkish government requested that the parliament allow American soldiers to use Turkish territory for strikes against Iraq and to send the Turkish military to Iraq; however this initiative was not approved by the parliament.

According to him, "the early elections are beneficial to the AKP. In the context of declining economic growth the ruling party seeks to hold early elections until more serious signs of the crisis appear and thereby avoid their possible electoral defeat if the elections would have taken place as appointed — in autumn 2019."

Güller also referred to a recent statement made by Berat Albayrak, the minister of energy and natural resources and Erdogan's son-in-law, who drew parallels between the operation in Afrin and the struggle in the upcoming elections.

According to Güller, the Turkish authorities seek to exploit the success of Operation Olive Branch as an instrument to consolidate power in the pre-election phase.

"A few days ago the minister of energy and natural resources, Berat Albayrak, made a statement drawing a parallel between the operation in Afrin and the elections. He said: ‘We have carried out a successful operation and now we are going to fight in the elections and win.' The ruling party seeks to exploit Afrin's success as an instrument for strengthening their foreign policy positions and consolidation of power within the country," Güller concluded.