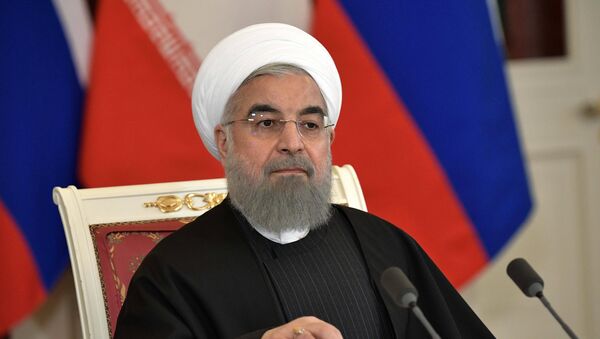 US President Donald Trump has repeatedly criticized the Joint Comprehensive Plan of Action (JCPOA) as being perhaps the worst deal in US history and threatened to withdraw Washington from the deal if it was not amended.

Iranian President Hassan Rouhani has warned US President Donald Trump to remain in the nuclear deal with Tehran, or face "severe consequences".

"I am telling those in the White House that if they do not live up to their commitments, the Iranian government will react firmly," Iranian President Hassan Rouhani said Tuesday.

"This is one of three options that we are considering," Shamkhani told reporters.

Last week, the United States, Germany, France and the United Kingdom agreed on the conditions under which Washington would remain committed to the Iran nuclear deal.

READ MORE: 'No Alternative': All Parties Must Comply With Iran Nuclear Deal — Moscow

Under the new agreements, the European and US sides decided that they needed to threaten Iran with new sanctions because of its missile tests and regional policy, but the JCPOA itself would not be altered.

'All or Nothing': Iran's Zarif Tweets 'There is No Plan B' on Nuclear Deal
The decision was made after earlier this year, Trump announced he would extend sanctions relief for Iran given that the country was in compliance with the JCPOA. He also said that would be the last time he signed the sanctions waiver unless European countries agreed to a supplemental deal to "fix" fundamental problems with the nuclear agreement.

On July 14, 2015, the European Union, Iran and the P5+1 group of countries — Russia, China, France, the United Kingdom, the United States and Germany — signed the JCPOA to ensure the peaceful nature of Iran’s nuclear program. Under this agreement, Iran pledged to not seek to develop or acquire nuclear weapons in exchange for the lifting of sanctions imposed against Iran.