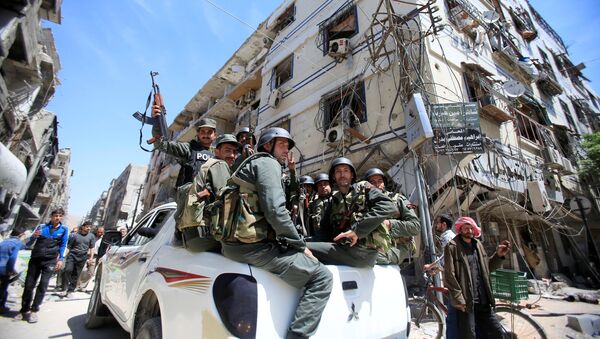 The US-led coalition has made every effort to undermine the achievements of Damascus and Moscow, Syrian parliamentarian Fares Shehabi told Sputnik, suggesting that the Skripal poisoning case, the alleged Douma attack and the US-led coalition's missile strike on Syria are interconnected.

The US, France and the UK have failed to break the will of the Syrian people by its joint missile strike; likewise, the US-led coalition's plan to support the creation of an autonomous region in southern Syria is doomed to failure, Fares Shehabi, a Syrian parliament member from Aleppo and chairman of the Chamber of Commerce and Industry of the Syrian Arab Republic (SAR), told Sputnik Arabic.

"[Separatists] can only sow discord for a limited period of time just to hold us back, just to weaken us," Shehabi said. "But eventually we will liberate the area. They tried to do the same in Aleppo, in Homs, in Eastern Ghouta, in Deir ez-Zor, but all their attempts failed. Very soon every city on the southern border will be liberated."

Speaking to journalists on April 19, Russian Foreign Ministery spokeswoman Maria Zakharova revealed that Moscow has information that al-Nusra* militants, supported by the US, were creating an autonomous region in southern Syria.

According to the Syrian parliamentarian, by launching a large-scale missile strike on Syria on April 14, Washington, Paris and London sent a message to Russia: "Don't try to act like a major superpower since you are not."

"Their goal was to insult the integrity and pride of Russia and the Syrian people. It was an aggression against us [the Syrians] not against the government, but they didn't succeed," the Syrian politician stressed.

US-Led Coalition's Attack on Syria Based on Lie

Syrian Doctor Reveals Why There Was No Chemical Attack in Douma
He highlighted that the US-led coalition's attack was based "on a big lie" and was an outright violation of international law. "The people who ordered this attack should be put in jail, brought to trial by their people because they lied," the parliamentarian opined referring to the alleged use of chemical weapons in the Syrian town of Douma, Eastern Ghouta, on April 7. The attack was immediately blamed on the Syrian government by the US and its allies.

Meanwhile, evidence continues to emerge indicating that the alleged attack was nothing short of a false flag operation.

Following the supposed strike, the Russian Defense Ministry's chemical corps commission on the ground reported that it had found no traces of chlorine or sarin poisoning.

The family of Hasan Diab, a Syrian boy presented in the White Helmets' video as a "victim" of the alleged Douma attack, confirmed that there was no chemical strike in the town. Another boy, 10-year-old Mustafa, who also played the role of a "victim" in the non-governmental organization's video, told Sputnik that he and other kids were given cookies and potatoes for taking part in the staged filming.

For his part, Uli Gack of the German TV network ZDF visited Syria and reported that Douma residents told him that the alleged April 7 attack had been staged by terrorists.

Earlier, on April 13, on the eve of the joint missile strike the Russian Defense Ministry reported that it had evidence "indicating Britain's direct participation in organizing this provocation in Eastern Ghouta." 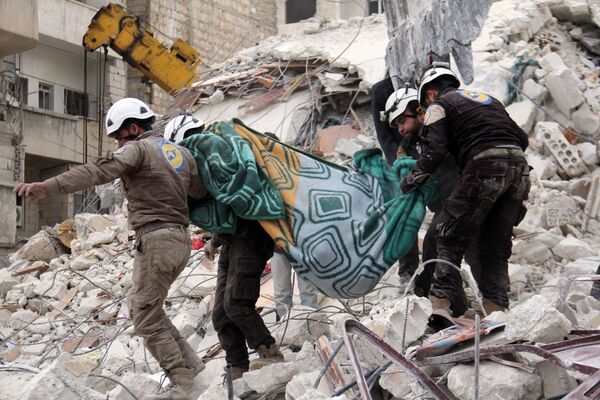 Syrian civil defence volunteers, known as the White Helmets, carry a body retrieved from the rubble following reported government airstrike on the Syrian town of Ariha, in the northwestern province of Idlib, on February 27, 2017
© AFP 2022 / Omar haj kadour

Theresa May Should Pay

The parliamentarian pointed out that the NGO was "funded, ruled and managed by David Messier, a London-based ex-MI6 agent." He's the one who funded the White Helmets in 2013 and he's from MI6 — that means that MI6 was behind the Douma attack and [UK Prime Minister] Theresa May should pay a price for this because she is heading the British government. This means she perpetrated a fraud on her own people, she attacked us, she violated our rights in Syria," Shehabi stressed.

US, Allies Stage Skripal Case, Syrian Chemical Attack, Russia Sanctions - Moscow
According to the Syrian politician the poisoning of former spy Sergei Skripal and his daughter Yulia in Salisbury, England, on March 4, which was groundlessly blamed on the Kremlin, the alleged Douma attack and the April 14 missile strike on Syria are deeply interconnected.

"It's a clear fabrication to make Russia and Syria look bad," he said. "They want to show that Syria and Russia use chemical weapons to get rid of their opponents and that they are chemical abusers, they want to demonize us."

In light of this, the US-led coalition may try to complicate the investigation by the Organization for the Prohibition of Chemical Weapons (OPCW) into the Douma case, he believes: "They want to keep Russia out of the investigation, and pin the blame on it."

Meanwhile, on April 23, Vladimir Ermakov, the director of the department of nonproliferation and arms control of the Russian Foreign Ministry, stated that Russia does not consider it necessary to take part in the OPCW chemical weapons probe in Douma.

"Why should Moscow participate in this investigation? It is conducted by qualified experts of the OPCW. Russia's task is to provide them with working conditions if possible," Ermakov told Sputnik, adding that the organization remains under heavy pressure from the US because Washington "made the decision in advance that Syrian President Bashar Assad should be removed." 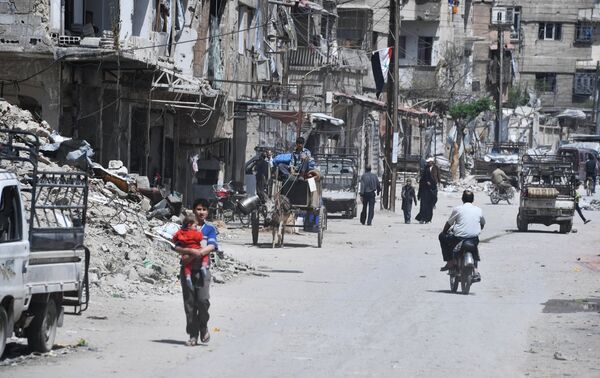 US Has Never Really Fought Daesh

Commenting on Washington's real objectives in Syria, Shehabi underscored that the US had never really sought to get rid of Daesh (ISIS/ISIL).**

"The US has never waged a war on Daesh: They were managing terrorism but they never wanted to get rid of it. I'll give you an example: Daesh fighters were located in the Deir ez-Zor region and when we [Syrian government forces] defeated them there, when we made every effort to eliminate them — who stepped in and stood up for them? It was the United States. They created an enclave on the Syrian-Iraqi border allowing Daesh to regroup there."

US Choppers Allegedly Evacuate Daesh Militants Amid Trump's Vow to Attack Syria
The parliamentarian opined that Washington has always kept an eye on Daesh and does not allow anyone to eradicate the terrorist group. The US motivation is clear, according to the politician: Once the Syrian army gets rid of the terrorist group, Washington will have no more justification for its already illegal presence in Syria.

Previously, Syrian news agency SANA reported about the alleged evacuation of Daesh militants of Iraqi origin and their families from Syria's al-Hasakah by US helicopters. US Air Force aircraft have been repeatedly spotted transferring Daesh commanders and militants from various spots in Syria to the US-controlled territories amid the Syrian Arab Army's advances.

** Daesh (ISIS/ISIL/IS) is a terrorist organization banned in Russia.

The views and opinions expressed by Fares Shehabi are those of the speaker and do not necessarily reflect those of Sputnik.