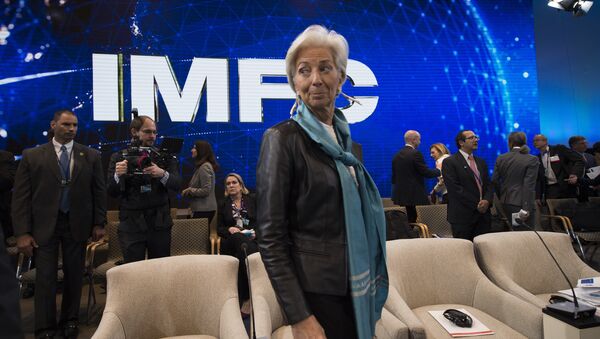 The US-China tariff war is affecting the economic prognoses of international observers. Speaking to Sputnik, Joaquin Arriola, a professor of political economy at the University of the Basque Country, suggested that recent International Monetary Fund's (IMF) forecasts regarding China's growth do not look trustworthy.

The newly released International Monetary Fund's (IMF) prognosis of global economic development has undergone certain changes amid the US-China trade frictions; as a result the data of its earlier October forecast for 2018-2019 was substantially adjusted.

Commenting on the IMF's fluctuating figures, Joaquin Arriola, a professor of political economy at the University of the Basque Country, opined that "the forecasts of a monetary and credit organization increasingly resembles those of Kabbalah augurs."

"While examining the prospects of the world economy one should periodically review the figures as they change significantly. In March the IMF says one thing and in October the organization is forced to review everything because the situation has changed, therefore this is an unreliable source of information," Arriola told Sputnik.

US Treasury Secretary Weighs China Visit Amid Anti-Protectionist Sentiment
According to the academic, while waging a trade war with China "the US has taken a step that cannot remain unanswered by its main trading partners." However, the nature of these responses is not yet clear: it could be either a reduction in trade or a change in the flow of large-scale international trade, he presumed.

"Perhaps, China will resort to other initiatives aimed at changing the structural framework of not only international trade relations, but also financial ones," Arriola suggested.

In the first quarter of 2018 China's economy grew at a faster pace than it initially foreseen by analysts amid strong consumer demand and active investment in real estate. GDP growth for this period amounted to 6.8 percent while analysts expected that it would be 6.7 percent. Thus, the previous quarter has become the third consecutive period with a 6.8 percent increase.

'Squeeze China': Trump's Economic Crackdown Against China Endorsed by Democrats
Meanwhile, the tariff war unleashed by the Trump administration on China has not pulled the rug from under Beijing's feet. The Middle Kingdom is mulling over potential measures to tackle the consequences of Washington's move.

In March 2018 Trump introduced 25 percent and 10 percent tariffs on steel and aluminum imports, respectively. In April Washington has threatened to impose new tariffs on more than $150 billion worth of Chinese goods. For its part, Beijing has taken tit-for-tat steps affecting American imports.

It was reported by Reuters on April 17 that Chinese Vice-Commerce Minister Fu Ziying held meetings with the ambassadors from France, Germany, Great Britain, Spain, Italy and the European Union, apparently seeking their support to counter Trump's protectionist measures.

How China is Forming a United Front to Counter Trump's Protectionism
One of Trump's recent measures against Beijing targets Chinese investments and purchases of US high-tech firms.

On April 19, Heath Tarbert, assistant Treasury secretary for international markets and investment policy, reported that the Trump administration is seeking to invoke the International Emergency Economic Powers Act (IEEPA). The 1977 legislation was largely used against "rogue regimes" and terrorist groups.

Additionally, US lawmakers are planning to expand the Committee on Foreign Investment in the US (CFIUS) to limit US-Chinese partnerships in order to prevent the transfer of advanced American technologies to China.