Proud to be English 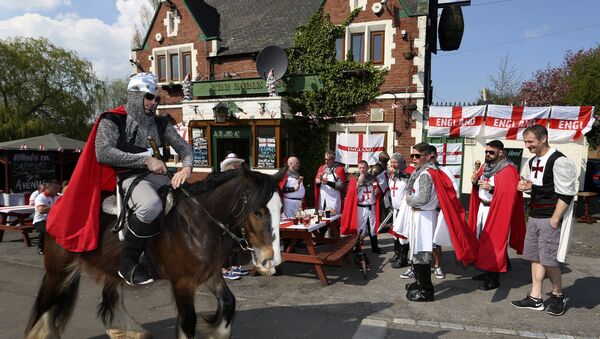 Jon Gaunt
All materials
Today should be a national holiday in England as we celebrate Saint Georges Day and the birth and indeed death of our greatest ever writer, William Shakespeare.

However, a quick glance through the newspapers and the mainstream media results in hardly a mention of our national day. Save for the fact that Jeremy Corbyn is trying to make political capital by saying if he was elected he would make it a Bank Holiday. I agree with him!

But this is more than just the Political establishment declaring we can have a holiday as there is something deeply troubling and dangerous about how the Establishment Elite, including Corbyn, view the English and English patriotism or nationalism.

Why is it the Irish, the Scottish and the Welsh seem able to celebrate their Saints days without any fear and loads of pride but we English seem incapable of shouting, "Cry God for Harry, England, and Saint George!"

In my hometown of Coventry everyone claims to be Irish and wears green, drinks Guinness by the bucketful and manages to find some distant relative with a bit of Irish in them on March 17.

But wear St George cross T-shirts or cufflinks and people, even the English, seem to treat you with suspicion as if at least you must be a little Englander or at worse a racist.

Theresa May's 'Game Plan' on Twitter: Wooing Young Brits or Saving Face?
Remember leading Labour MP Emily Thornberry snottily tweeting about one of her constituents hanging the cross of Saint George out of his bedroom windows during a football tournament?

I have lost count of the stories I have covered on the radio over the years about dustbin lorry drivers, cabbies or others being threatened with the sack if they display our flag on their vehicles.

This is errant but also dangerous nonsense especially after we reclaimed the Cross of Saint George from the far right way back at the European football championships in 1996.

It is almost as if we English have been hammered into submission as our culture our heritage and even our history has been attacked by the snowflake generation.

The latest attack comes from a 23-year-old art historian, Alice Proctor who is organising sell-out tours of London's museums and galleries claiming that the artefacts in them represent 'the history of empire and genocide'.

Alice, an Australian, even brands Lord Nelson a 'white supremacist' and Queen Elizabeth I a 'slaver'.

Her basic premise is that the items on display at museums like the British Museum and the Victoria & Albert fell into our country's hands through 'slavery' and 'looting'.

There is of course some truth in this theory however she adds further insult to our collective injury by charging people £11 quid a head to hear her spout her snowflake nonsense and then gets these same mugs to wear badges that state, "Display it like you stole it."

Her adverts to promote her tawdry tours include a portrait of our greatest Naval Hero, Lord Nelson with the words, "white supremacist" scrawled across it in red ink whereas Captain Cook is insulted by calling him an "invader"

Now if this was a one off we could excuse this as the attention seeking activity of a political wannabe but coming so soon after the so-called journalist, Afua Hirsch started the wrecking ball rolling by suggesting that Nelsons Column should be pulled down as he defended slavery?!

Just when you thought this nonsense would stop Historic England thought it was a good idea to actually use an animated wrecking ball to knock Lord Nelson of his perch to publicise a debate about removing historic monuments.

This kind of muddled snowflake revisionist view of history is also affecting art and literature and needs to be resisted.

We even have Universities being forced to issue trigger warnings to pathetic students about violence in Shakespeare plays!

Of course, this nonsense started in the US with the civil war statues and then the idiotic debate about the Rhodes statue in Oxford, ironically started by an African student who was actually benefitting from a Rhodes scholarship!

Trollolol, Holiday Edition: Russian Embassy in UK Reminds MP That It's Not 1984
We are sleep walking into an even more extreme version of George Orwell's 1984 where he declared, "Every record has been destroyed or falsified, every book rewritten, every picture has been repainted, every statue and street building has been renamed, every date has been altered. And the process is continuing day by day and minute by minute. History has stopped. Nothing exists except an endless present in which the Party is always right."

You cannot apply the values of today to history and I am a firm believer that unless you recognise and understand your history how you can live in the present and shape the future? So, I am not suggesting we, dare I say it, "whitewash" our past but we must recognise the positives as well. I do not think I am alone in this as I believe 17.4 million people who voted for Brexit wanted to share national pride and regain our Sovereignty and independence.

We should go on celebrating our national heroes, quoting Shakespeare, supporting our crap football team and drinking our warm beer and to hell with the cultural Marxists who are trying to re-write history.

Joking aside, I love my country, I am patriotic and I am immensely proud to an Englishman.