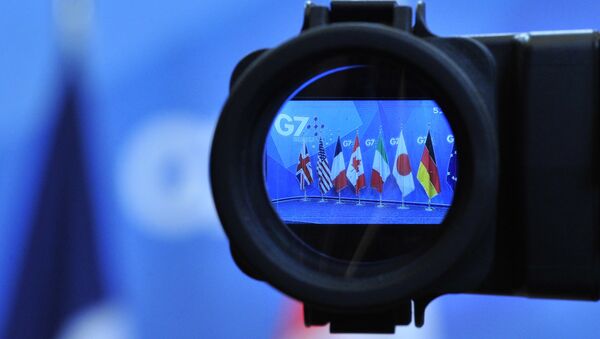 "What we decided… was that we were going to set up a G7 group that would look at Russian malign behaviour in all its manifestations, whether it's cyberwar, whether it's disinformation, assassination attempts, whatever it happens to be and collectively try and call it out," Johnson told reporters.

"Russia is so unbelievably clever at kind of sowing doubt and confusion and spreading all this fake news and trying to muddy the waters. We think there's a role for the G7 in just trying to provide some clarity," the minister added.

He noted that following the alleged poisoning attack on former Russian intelligence officer Sergei Skripal and his daughter in the British city of Salisbury, 28 countries supported the United Kingdom and made a decision to expel Russian diplomats.

UK Divulging Sensitive Data on Chemical Weapons, Russian Embassy Suspects
On March 4, Sergei Skripal, convicted in Russia for espionage in favour of Great Britain, and his daughter Julia were found unconcious on a bench at a shopping center in the city of Salisbury, UK. London rushed to accuse Moscow of being behind the poisoning with the use of the A234 nerve agent. Russia has refuted all allegations and pointed to the complete lack of evidence to support such claims. In the wake of the Salisbury incident, a number of Western countries "in solidarity" with Britain decided to expel a total of over 100 Russian diplomats, to which Moscow responded with reciprocal measures.

Relations between Russia and the West, in general, has been worsening since 2014 when Moscow was accused of alleged involvement in Ukrainian domestic affairs. These tensions have significantly escalated in recent months over the Skripal poisoning case and US-led strikes on Syria in response to the alleged use of chemical weapons.