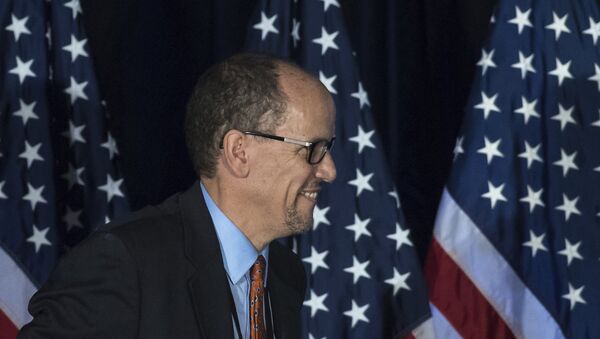 © AP Photo / Branden Camp
Subscribe
Democratic National Committee (DNC) Chairman Tom Perez on Sunday refused to reveal to NBC's Chuck Todd whether the committee’s lawsuit against the Trump campaign, Russia and WikiLeaks was Hillary Clinton’s idea and how much money he thinks it will end up costing the Democrats.

The DNC chair's comments come after the committee announced that it had filed a complaint in federal district court in Manhattan, accusing Russia, Trump campaign officials and WikiLeaks of conspiring to hack Democratic Party servers and reveal information found therein to the public as a means to help US President Trump win the 2016 election.

Perez said on Meet the Press that the lawsuit was filed before the end of special counsel Robert Mueller's investigation into alleged collusion because Democrats "have to protect" their rights and "don't know when director Mueller is going to act," cited by Crooksandliars.com.

READ MORE: Democrats' Lawsuit Against Russia 'Attempt to Justify Their Own Defeat' — Moscow

Perez refused to answer whether Hillary Clinton supported the lawsuit.

"You'll have to ask Secretary Clinton," Perez said, adding that "I have not consulted Hillary Clinton to ask her permission to file a complaint. The buck stops with Tom Perez. And we filed this complaint because our democracy is at risk."

Trump Says DNC Lawsuit Will Expose Information Related to Clinton Email Scandal
As for comments made by Trump's 2020 campaign manager Brad Parscale that a "desperate, dysfunctional and nearly insolvent Democratic Party [has] sunk to a new low to raise money," Perez noted that the DNC was bringing the lawsuit only "to seek justice, to expose the truth and to deter future behavior."

The DNC chairman did not answer how much money the process and the focus on 2016 and Russia was going to cost the committee. While some Democrats have expressed concern about whether the financial investment involved could take away from resources for the upcoming 2018 midterms, Perez said it was worth the cost.

"I don't know the amount of money that it will take", Perez said. "But I'll tell you, it's hard to put a price tag on preserving democracy. And you know what, that's why I concluded that it would be irresponsible of me not to do this."

Trump hailed the DNC lawsuit in a statement claiming that it would expose information related to a scandal surrounding Clinton's email server that was previously denied the FBI.

Theater of the Absurd: DNC Sues Russia, WikiLeaks, and Trump Campaign
Several US intelligence agencies asserted last year that they suspected Russia to be behind the DNC leaks. Both Trump and the Kremlin have denied allegations of collusion, with Moscow calling them absurd and a distraction from real election fraud.

Commenting on the lawsuit, Russian Foreign Ministry representative Maria Zakharova said the ministry "has not received official notifications on this matter, therefore it is too early to speak about the nature of our actions. However, if the information is true, then, it seems, it is a kind of attempt of the Democrats to find excuse for their defeat."

She added that, "for the last year and a half since the elections in the United States, those who lost them, instead of trying to figure out where they themselves have not worked, are persistently trying to blame the failure on some ‘conspiracy' and ‘external interference.'"