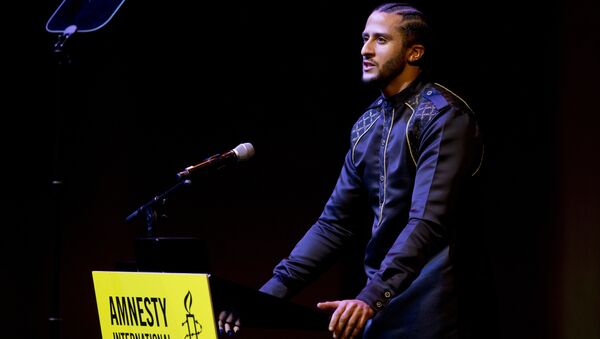 © AP Photo / Peter Dejong
Subscribe
Professional US football player Colin Kaepernick, although lacking a sports team, can claim the support of a much larger posse, after receiving the 2018 Ambassador of Conscience Award from Amnesty International, the global human rights group’s highest honor.

In Amsterdam on Saturday, Kaepernick, 30, became the recipient of the accolade, sharing the honor alongside human rights heroes such as Nelson Mandela, Malala Yousafazi and Irish rock giants U2.

Offered as an acknowledgment which "celebrates individuals and groups who speak out for justice," the Amnesty International award was bestowed on the Wisconsin-born athlete in recognition of the risk he took to his reputation and career after almost single-handedly creating an effective protest movement drawing attention to widespread police violence in the US against people of color.

By kneeling during the national anthem prior to the beginning of NFL games, Kaepernick kickstarted a movement that has been replicated across the US and the globe. The child of an unwed teenage mother who was given up for adoption, Kaepernick is credited with opening a national debate concerning free speech and patriotism.

"When high-profile people choose to take a stand for human rights, it emboldens others," declared Augusta Quiney, the director of the human rights group's Art for Amnesty outreach program, in honoring the young sportsman.

"This is an opportunity to be on the right side of history," she added, cited by Time magazine.

Kaepernick thanked the organization but shared the honor by noting that human rights causes are everywhere and happening now.

"This is an award I share with all of the countless people throughout the world combating the human rights violations of police officers, and their uses of oppressive and excessive force," he stated.

"To quote Malcolm X, when he said that he, ‘will join in with anyone — I don't care what color you are — as long as you want to change this miserable condition that exists on this earth,' I am here to join with you all in this battle against police violence," cited by Time.

Kaepernick's midwifery in birthing a protest movement has likely cost him his career. While he has filed a collusion lawsuit against the NFL, most note that getting the entrenched and deep-pocketed US sports organization to open up and play fair is unlikely, at best.

Kaepernick has been the recipient of Sports Illustrated's Muhammad Ali Legacy Award and the ACLU has awarded him its Eason Monroe Courageous Advocate Award. GQ magazine voted him the 2017 "Citizen of the Year."

"We rely on people like Colin," asserted Quiney, "when they feel like they simply cannot be silenced, to speak out and inspire huge numbers of people, despite the professional and personal risks."

000000
Popular comments
where to next in his career then?
michael
23 April 2018, 02:38 GMT
000000
michael, notice not ONE word from him about Obama's multiple wars and war crimes; same goes for the other kneeling morons in the NFL