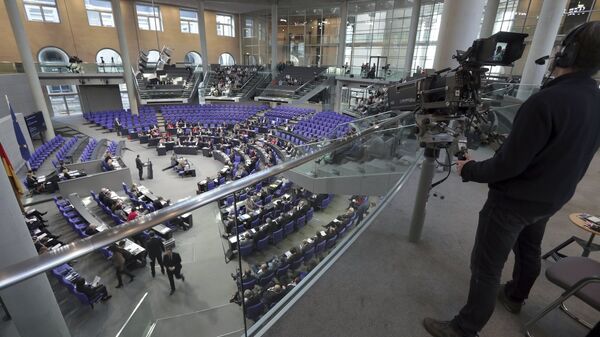 According to lawyers of the Bundestag, the missile attack by the US-UK-France coalition, supported by the German Government, violates international law. The grounds that the strike was a retaliatory measure following an alleged chemical attack were dismissed as “not convincing.”

The law experts of the German Parliament denounced the legal grounds for the US-led missile attack on Syria in a report requested by the left-wing party Die Linke.

"The deployment of military force against a state to punish it for breaking an international convention is a violation of the international law prohibiting violence," reads the report, as cited by the German Press agency DPA.

The lawyers dismissed as "unconvincing" the grounds for the airstrike, named by the UK as a retaliatory response for the chemical weapons attack, allegedly perpetrated by Syrian President Bashar Assad. According to the British party, exceptions from  international norms prohibiting violence are allowed when they prevent overwhelming harm to people.

The Bundestag service concluded that the conditions for such exclusion were not met. According to the report, the military strikes are questionable as “suitable means to prevent further suffering, especially taking into account the death toll of the conflict in Syria."

The report also pointed out at the lack of the approval from the UN Security Council. Along with the coalition countries, it includes Russia, opposing the interference in Syria, so German Foreign Minister Heiko Maas earlier argued that the international body was unable to react to the suspected chemical attack. Such reasoning was acknowledged legally irrelevant by the Bundestag service.

Vocal Support, No Actions From Merkel

The conclusion contradicts the position taken by the German Government. Although the country didn’t take part in the strike along with Germany’s allies from NATO, Chancellor Angela Merkel endorsed the actions. In her statement, published shortly after the attack, she supported the strikes, which “were successful and coherent to attract international attention to the deployment of chemical weapons in Syria and prevent further violations by the Syrian authorities.” 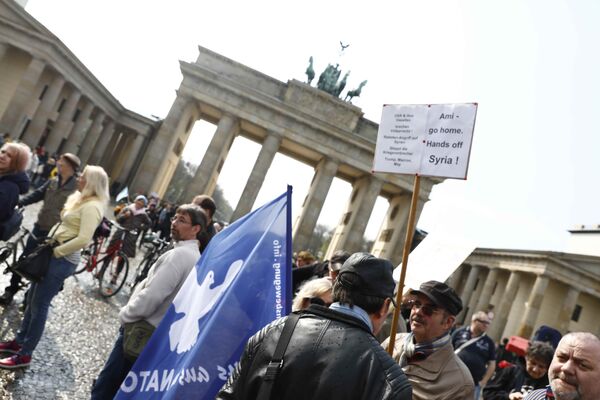 A protester holds a poster during the demonstration against airstrikes on Syria in Berlin, Germany
© REUTERS / Axel Schmidt

On April 14, the United Kingdom, the United States and France launched strikes at Syria over reports of a chemical attack in the city of Douma, with the three countries firing over 100 missiles at the Middle Eastern country.

Investigators from the OPCW watchdog were scheduled to enter Douma to investigate an incident exactly on April 14, when the Western coalition launched the airstrike. The OPCW group is currently in Damascus, but it remains unclear when they will be able to access the site of the alleged attack. The UK delegation to the OPCW accused Damascus and Moscow of impeding the probe. Russia dismissed the allegation, as Deputy Foreign Minister Mikhail Bogdanov said that terrorists in Syria's Douma had been preventing the OPCW from entering the area.

Syria’s President Bashar Assad has slammed the attack as an act of "aggression," while Russian President Vladimir Putin stated the actions of the group of Western countries “violated the norms of international law, including the UN Charter, and caused significant damage to the process of peaceful settlement of the Syrian crisis." The strikes were also launched without parliament's approval in all the three countries, which drew criticism from local lawmakers.