What You Need to Know About Kim's Decision to Suspend Nuclear, Missile Tests 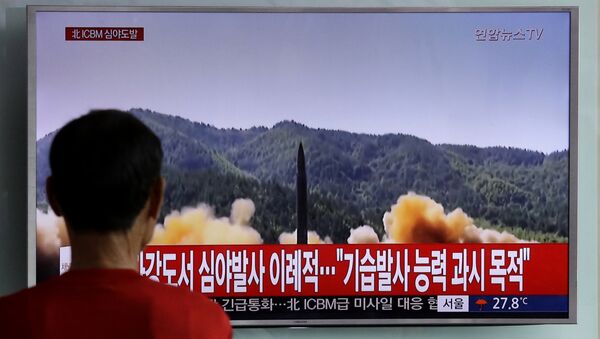 The decision was applauded as good news in Seoul and Washington, which will have direct talks scheduled with Kim, but decried as insufficient by Japan, which fears being sidelined by its allies in the denuclearization process.

North Korea announced the decision to halt nuclear tests and intercontinental ballistic missile launches effective immediately and to shut the northern Punggye-ri site of all six atomic tests after Friday’s meeting of the ruling party, according to the KCNA state news agency.

This comes less than a week before Kim Jong-un is expected to sit down with South Korean President Moon Jae-in for talks on a belated peace treaty next Friday. He is also expected to meet with US President Donald Trump by June to discuss denuclearization.

The reclusive Communist state added that now that it had a nuclear weapon it would pursue economic growth and peace on the Korean peninsula. The caveat is that the North will not hand its nuclear weapons or technology over to a third party and will use it in the event of a nuclear provocation.

Pyongyang’s reconciliatory move ahead of the summits was met with praise by President Donald Trump, who called it "very good news for North Korea and the World — big progress!"

The US president tweeted he looked forward to the summit. Earlier this week, Trump said that a "bright path" lied ahead of North Korea when it achieved denuclearization "in a completely verifiable and irreversible way."

South Korea’s presidential office echoed him, saying Pyongyang’s decision was "meaningful progress" for the denuclearization of the Korean peninsula and created a "positive environment" for the upcoming meeting.

Japan’s Defense Minister Itsunori Onodera lambasted the promise as "meaningless" for Japan unless the North halted its short- and medium-range missiles. "I am not satisfied at all," he was quoted as saying by the Nikkei newspaper.

Asia
'Step Forward': World Reacts to North Korea's Freeze on Nuclear Testing
Japanese Prime Minister Shinzo Abe struck a more upbeat note, saying this was a step forward, but added it must be followed by a "complete, verifiable and irreversible" dismantlement of North Korea's nuclear and ballistic weapons, after the Foreign Minister Taro Kono said Tokyo wanted the arsenal to be scrapped by 2020.

North Korea said it would hold on to its nuclear arsenal and will not hand it or any nuclear technology over to a third party. It also promised to respond to any nuclear threat or provocation.