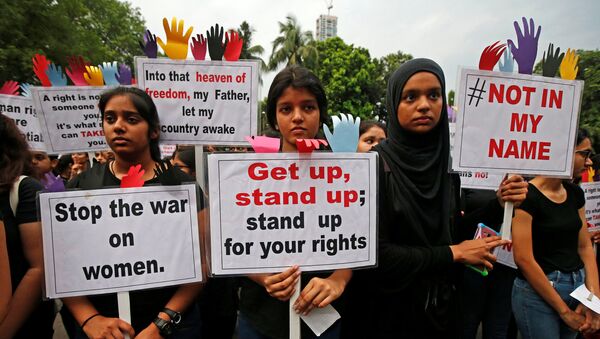 MOSCOW (Sputnik) - The Indian government on Saturday approved an ordinance to amend the Protection of Children from Sexual Offences (POCSO) Act to introduce the death penalty for gang rape of girls of age below 12, local media reported.

Guilty Google: India Imposes Penalty of $21 Mln for Search Bias
Minimum prison terms have been also extended for rape of women and girls under 16 years old — from rigorous imprisonment of seven years to 10 years and from 10 years to 20 years respectively.

The ordinance was adopted after a resonant case involving the abduction and rape of a girl aged 8 in Kathua in January. A total of eight people are being accused, including two police officers. According to investigators, they kidnapped the girl from a nomadic Muslim tribe, pumping her with strong drugs. Before the victim was killed, she was kept in one of the Hindu temples of the city.