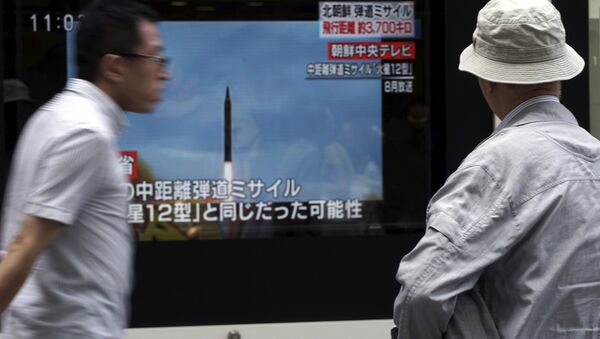 "North Korea has decided to stop nuclear and missile tests and focus on economic growth and improving well-being of its people, we welcome this decision," Foreign Ministry spokesman Lu Kang said in a statement.

He said this decision would help improve the situation on the Korean peninsula, calm tensions and promote denuclearization.

"We welcome the statement of Kim Jong Un, chairman of the Workers' Party of Korea, enshrined in the resolution … of April 20, on the termination of nuclear and missile tests by the DPRK starting from April 21, 2018, as well as [on the termination of] the use of the nuclear test site in this country," the ministry said in a statement.

"We consider this decision an important step toward further removal of tensions on the Korean peninsula and toward consolidation of positive trends in normalizing the situation in Northeast Asia," the ministry added.

The office of South Korea’s president has praised as meaningful the promise made by the North to halt nuclear and long-range missile testing and shut an atomic test site, local media said Saturday.

North Korea's move will create a "positive environment" at the talks with South Korea and the United States in the coming months, President Moon Jae-in's office said, adding it would take effort to prepare for next week's summit with Kim Jong Un.

"The announcement by the leader of the Democratic People’s Republic of Korea (DPRK), Kim Jong-un, that the country will, as of today, stop nuclear tests and launches of intercontinental ballistic missiles, as well as the closure of its nuclear test site, is a positive, long sought-after step on the path that has now to lead to the country’s complete, verifiable and irreversible denuclearisation, the full respect for its international obligations and all relevant UN Security Council resolutions, and the ratification of the Comprehensive Nuclear-Test-Ban Treaty," Mogherini said in a statement.

"The European Union looks forward to the upcoming Summit meetings between the President of the Republic of Korea, Moon Jae-in and the leader of the DPRK; and the President of the United States, Donald Trump, and the leader of the DPRK. We hope that these high-level initiatives can continue to build confidence and bring about additional, concrete and positive outcomes," she added.

"The European Union will continue to support a negotiated solution in any way possible, including through sharing our own experience of negotiations for denuclearisation. We will also continue to implement in full our policy of critical engagement, which combines strong pressure on the DPRK regime through sanctions — both imposed by the United Nations and autonomously imposed at the European Union level — with keeping communication channels open," Mogherini stressed.

After the report being issued, Trump tweeted: "This is very good news for North Korea and the World — big progress! Look forward to our Summit."

North Korea’s denuclearization is expected to be discussed at the summit between Kim Jong Un and US President Donald Trump in May or June.

London hopes that Pyongyang's commitment to halt nuclear and missile tests means that Pyongyang is going to hold talks in good faith, a spokesperson for the UK Foreign Office told Sputnik Saturday.

"A long term commitment from Kim Jong Un to halt all nuclear tests and ICBM launches would be positive step. We hope this indicates an effort to negotiate in good faith… We remain committed to working with our international partners to bring about our goal of a complete, verifiable and irreversible denuclearization of the Korean peninsula, and to do so through peaceful means," the spokesperson said.

Japan’s Abe Lauds North Korea Move to End Nuclear Tests
Earlier, North Korea’s leader Kim Jong Un on declared an end to nuclear and long-range missile testing and plans to shut an atomic test site, in a surprise move timed to historic summits.
000000
Popular comments
May be wrong of course but the announcement coming so soon after Kim Jong Un's visit to Beijing may indicate that China has something to do with this, and having NoKo open up and become sanction free will be a positive move in enabling the Belt Road initiative - be interested in how the US will react, my expectation is that short term they will say how wonderful it is, and the stable genius will claim brownie points for being instrumental in this development and then a total backflip will happen and NoKo will be back to where it started. Hope I'm wrong
brwnxpng
21 April 2018, 11:18 GMT
000000
He will halt the tests but keep the nuclear weapons. In light of the events in Syria, it will be suicidal to do otherwise. I also think it is now unreasonable for other countries to demand denuclearization. Got to have guns if the only policeman in town is addicted to drugs...
Alan Campbell
21 April 2018, 12:23 GMT1
000000
Newsfeed
0
New firstOld first
loader
LIVE
Заголовок открываемого материала
Access to the chat has been blocked for violating the rules . You will be able to participate again through:∞. If you do not agree with the blocking, please use the feedback form
The discussion is closed. You can participate in the discussion within 24 hours after the publication of the article.
To participate in the discussion
log in or register
loader
Chats
Заголовок открываемого материала
Worldwide
InternationalEnglishEnglishMundoEspañolSpanish
Europe
DeutschlandDeutschGermanFranceFrançaisFrenchΕλλάδαΕλληνικάGreekItaliaItalianoItalianČeská republikaČeštinaCzechPolskaPolskiPolishСрбиjаСрпскиSerbianLatvijaLatviešuLatvianLietuvaLietuviųLithuanianMoldovaMoldoveneascăMoldavianБеларусьБеларускiBelarusian
Transcaucasia
ԱրմենիաՀայերենArmenianАҧсныАҧсышәалаAbkhazХуссар ИрыстонИронауОssetianსაქართველოქართულიGeorgianAzərbaycanАzərbaycancaAzerbaijani
Middle East
Sputnik عربيArabicArabicTürkiyeTürkçeTurkishSputnik ایرانPersianPersianSputnik افغانستانDariDari
Central Asia
ҚазақстанҚазақ тіліKazakhКыргызстанКыргызчаKyrgyzOʻzbekistonЎзбекчаUzbekТоҷикистонТоҷикӣTajik
East & Southeast Asia
Việt NamTiếng ViệtVietnamese日本日本語Japanese中国中文Chinese
South America
BrasilPortuguêsPortuguese
NewsfeedBreaking
22:10 GMTUS Supreme Court Allows Execution of Oklahoma Inmates, 1st Inmate to Die Thursday Evening
22:05 GMTOne Killed, Two Injured in Protests Against Military Takeover in Sudan
21:59 GMT'Meta Is Cleaner': Twitter Ridicules Facebook's Rebranding
21:26 GMTPentagon Delayed Hypersonic Missile Test Week Before Biden-Putin Summit in June - Reports
21:16 GMTNASA’s Juno Probe Looks Inside Stormy Jupiter Atmosphere for Clues on Solar System Birth
21:15 GMTFlorida School Under Fire After Taking Elementary School Kids on a Field Trip to Gay Bar
20:56 GMTTrump Calls Facebook CEO a 'Criminal' for Donating $400m to Election Offices
20:01 GMTEx-New York Governor Cuomo Charged With Sex Crime - Reports
19:55 GMTHaiti Enters State of Chaos Amid Gang-Related Violence, Kidnappings, UNICEF Says
19:53 GMT‘Look Elsewhere’: NAACP Urges Pro Athletes Not to Sign With Texas Teams Due to Abortion, Voting Laws
19:47 GMT12 Police Officers Move to Florida After Bonus Offer from Gov. DeSantis
19:36 GMTUS Indicts 38-Year-Old Man for Threatening to Murder Congresswoman
19:33 GMTUS Tech Stocks Hit Record Highs as Facebook Changes Name to Meta
19:25 GMTTurkey Should Not Budge In on US Demands in S-400 Row, Ex-General Says
19:20 GMTMagnitude 5.2 Earthquake Hits Alaska, EMSC Says
19:14 GMT'My Export' Digital Platform Has Saved More Than 20 Tonnes of Paper in One Year, REC Says
19:14 GMTWSJ: Four US Intel Agencies Offered Reports on Afghanistan, All Failing to Predict Fall of Kabul
19:07 GMTRDIF Welcomes Israel’s Recognition of Sputnik V Vaccine
19:00 GMTResponse Time of Emergency Services in New York May Increase Due to De Blasio's Vaccination Mandate
18:22 GMTFacebook CEO Zuckerberg Reveals Company's New Name Will be 'Meta'