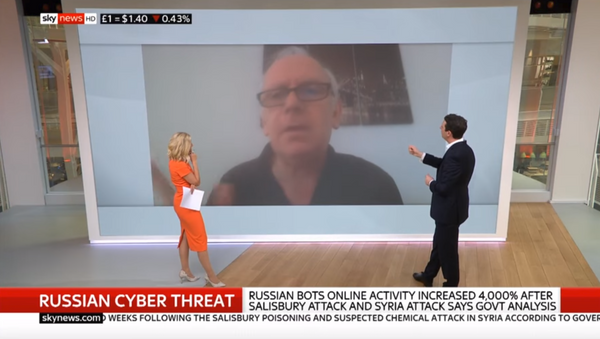 An interview with a prolific Twitter user accused by the British government of being a “Russian Bot” quickly turned heated as challenged their arguments, particularly their claim that by not toeing the UK government line, he was “anti-Britain” - and perhaps even a Kremlin agent.

It all started with a blog post from the Digital Forensic Research Lab of the DC-based, Gulf-funded think tank Atlantic Council, which said that some of the conversations about the poisoning of double agent Sergei Skripal "appear to involve organized activity, including possibly fake accounts masquerading as English users, in the well-known pattern of the ‘troll factory' in St. Petersburg." The post devotes a substantial portion of space to Twitter user @Ian56789, cited as an "unusual account" that was "especially active" on the subject.

​The British government claimed on Thursday to have concluded that there was a 4,000 percent increase in activity from Russian trolls following the Skripal poisoning and the West's attack on Syria on April 14, naming @Ian56789, hereinafter ‘Ian,' as one of the Kremlin's accounts.

The US government, for its part, claimed there was a "2,000 percent increase in Russian trolls," as opposed to activity therefrom, although that was just in reference to Syria, not the poisoning in Salisbury.

As the Whitehall analysis made its rounds through the press, the Guardian wrote "One bot, @Ian56789, was sending 100 posts a day during a 12-day period from 7 April and reached 23 million users before the account was suspended."

The only other Twitter user named was @PartisanGirl, who operates a Verified twitter account, which requires the user to submit their government identification before verification status is granted.

That may have been the end of it, but then Ian took an invitation to appear on Sky News. The news anchors began by asking the man, who appeared on video remotely, whether he was truly a "Russian bot."

"That is 100 percent a total lie and complete fabrication by the UK government," Ian said, with a British accent. He went on to argue that the British government is attacking "anyone who calls out the UK government lies on what has been happening recently," and that he's been specifically targeted because he's gained a substantial audience of Twitter followers.

Ian argued that Syrian President Bashar al-Assad is "not the stupidest man in the world," and wouldn't cross one of the West's so-called ‘red lines' while he was "winning the war."

"The jihadi terrorists, the Wahhabi salafists! Jaysh al-Islam, who controlled that area, staged the attack," he suggested instead.

Sky News Defense Correspondent Alistair Bunkall then butted into the conversation, declaring that one of the reasons the British government highlighted Ian's account was because "you have consistently and prolifically taken an anti-British standpoint."

As Ian tried to refute the claim, Bunkall brought up an erroneous, largely inconsequential tweet from 2012 from Ian's account claiming to have "voted" for Ron Paul. Ian, for his part, can be heard imploring the host to "stop" and allow himself a chance to explain, eventually saying he "rigorously supported" the candidate.

Eventually, Ian is able to speak to the question of whether her tweets are, "anti-Britain," as alleged. "The question is: what does it mean by being ‘pro-Britain' or ‘pro-American?' Does it mean being pro- the interests of 60 million British people, or does it mean the clique in the UK government, the cabinet, that are doing things for their own personal benefit and their cronies and the arms companies?"

"I have no Kremlin contacts whatsoever, I do not know any Russians, I have no contact with the Russian government or anything to do with them, I've got no contact with spies," Ian said. "I'm an ordinary British citizen! Ordinary British citizen who happens to do research on what is going on in the current neocon wars, which are being fought in Syria at this very moment."

The Atlantic Council blog post was updated following Ian's appearance on Sky News with an editor's note saying that he was interviewed by Sky News and "therefore appears to be a pro-Kremlin account, rather than one directly run by a Kremlin operation."

Ben Nimmo, who authored the original post, told Polygraph.info after Ian's appearance on Sky News that "anyone who calls him a Russian bot is just handing him a propaganda win," but conceded that he's, "Not, as I suspected, a troll factory account. But a troll."

Since US President Donald Trump's election victory, widespread panic has hit the West over allegations of "Russian bots" duping unsuspecting Americans into listening to alternative, Kremlin-inspired viewpoints using anything from ‘Buff Bernie' Sanders coloring books to overtly Christian Facebook memes. The oft-cited Hamilton 68 Dashboard, created by the Alliance for Securing Democracy, neoconservative Bill Kristol's latest think tank after the Project for a New American Century and Foreign Policy Initiative, has re-interpreted months after its launch. It was touted as a tool to track Russian bot activity, but instead just seems to note hashtag campaigns.