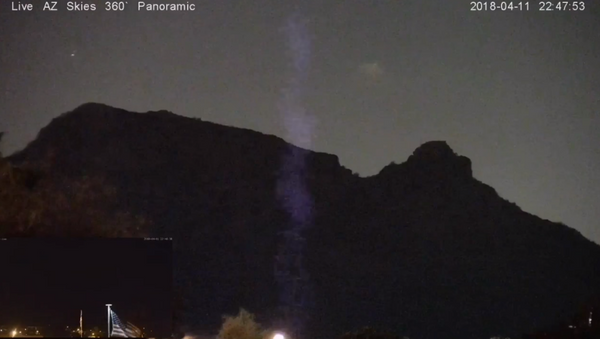 Video footage uploaded to YouTube Tuesday is catching buzz after showing purple beams of light coming from the skies of Arizona while unidentified flying objects hover in the background.

The video, which was uploaded onto the Earthly Patriot YouTube page, was initially recorded on at 10:40 p.m. local time April 11, 2018, in Phoenix, Arizona.

​While the first beam appears to strike down toward the ground, the second, as the narrator notes, "appears to be coming from the bottom and going upward" in something like a spiral.

The second mysterious find only appears after a UFO pops up in the frame, flying behind a mountain. After the beam appears, however, it seems as though the same flying object zooms past the mountain in the opposite direction while a second object flies toward the mountain.

Some commenters have connected the dots and concluded that the recording is an example of alien life, suggesting that extraterrestrial visitors are keeping close tabs on humans.

Or, according to YouTuber Nelson Hernandez, there could just be "a war going on over our skies" which explain "the UFO's erratic movements."

"The air is highly charged with metal ions from the Chem trailing," Kathryne Paine wrote, touching on the theory that condensation trails left behind by airplanes actually contain chemical or biological agents. "The purple beams could be plasma discharge, the spiral shape resembles a Birkland current to me. Unbelievable captures of UFO craft, it looks like they want to put on a display for us. Government won't disclose them, so they are coming out for us."

Not everyone, however, has linked the lights to UFOs or mind-controlling chemtrails. It could always be HAARP!

These theorist suggested that the lights were part of a secret project done by the High Frequency Active Auroral Research Program (HAARP), a program by the US Air Force, US Navy, University of Alaska Fairbanks and Defense Advanced Research Projects Agency (DARPA) to analyze the ionosphere. There is speculation that HAARP allows the US government to control weather conditions.

"The purple beams may very well be part of the HAARP or Blue Beam Projects, which have the capacity to project all kinds of images on the skies, create insanely loud sounds etc — all of which are so enormous that they can be seen/heard over a very large area," user Dolphin Dream wrote. "Columns of light in various colors have been recorded all over the world, and could be part of that — or not. In any case, I do NOT believe any of this is actually for the good of humanity or the planet."

"Hope we all survive this insanity," Dream added.