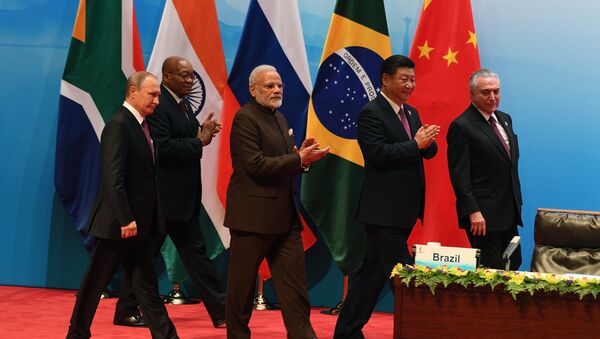 © Sputnik / Grigoriy Sisoev
/
Go to the mediabank
Subscribe
International
India
Africa
India believes that existing rating agencies—S&P Global Ratings, Fitch Ratings, and Moody’s Investors Service— are biased against developing countries and that BRICS block should have its own credit rating agency. China argues that government-backed rating agencies would not enjoy much credibility.

New Delhi (Sputnik): India has called upon members of the BRICS block to take an early call on the BRICS credit rating agency mooted by Prime Minister Narendra Modi in 2015.During the first meeting of the BRICS Finance Ministers and Central Bank Governors held on the sidelines of the IMF/World Bank Spring Meetings on Thursday in Washington DC, India called for consensus on the matter.

"India sought the support of the Presidency in building consensus amongst the BRICS membership on the BRICS Rating Agency proposal. The country requested the Presidency to receive and take forward the report to be submitted by an expert group set up under the aegis of BRICS Business Council to study the feasibility of the BRICS Rating Agency," India's finance ministry said in a statement.

BRICS Should Topple Western Dominance in Credit-Rating Market - Indian PM
India has long held the view that a new rating agency will provide an immense contribution to the existing knowledge of rating systems. But, China has argued that a government-backed credit rating agency will not have any credibility and BRICS should stay away from it. Despite reservations of China, the proposal was mentioned at the 8th BRICS Summit held in Goa in 2016 and the body formed an expert group to explore the possibility of setting up an independent rating agency.

Presently, Fitch Ratings and S&P Global Ratings rate India at the lowest investment grade, while Moody's Investors Service surprisingly upgraded the sovereign rating to Baa2 from Baa3 last year. The Indian finance ministry several times expressed its reservation on the ratings given by the Fitch and S&P. As India needs massive capital from abroad to fund its infrastructure requirement, it wants unbiased credit rating for the economy but global firms and venture capitalists give priority to the economies having a better sovereign rating.

Meanwhile, the first meeting of the BRICS finance ministers discussed the expansion of New Development Bank's (NDB) membership, the proposal of the South African Presidency for setting up a working group on illicit financial flows and a BRICS Task Force on Public Private Partnership (PPP).

"A more careful and cautious approach on the value and addition/ benefits   new member will bring to the Bank would be desirable rather than setting deadlines which are practically difficult to achieve," Subhash Chandra Garg who represented India at the meeting said.

On the issue of setting up of PPP Task Force, India suggested that NDB already has a Project Preparation Fund hence a separate similar preparation fund for PPP is not needed.