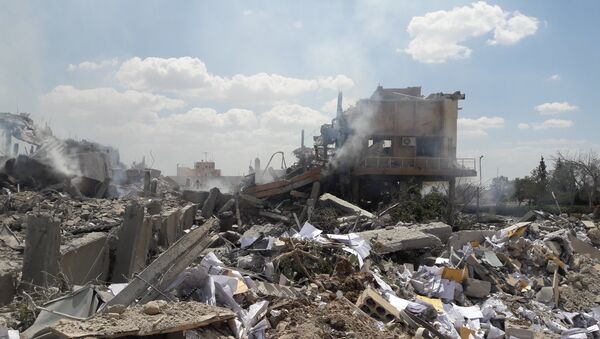 According to the Kantar Emnid survey issued by the Handelsblatt newspaper, a total of 86 percent of the German citizens are against the country's involvement in the military action in the Middle eastern country, and only 10 percent of respondents support it.

The poll was conducted on April 17-18 — several days after the US, UK and French strikes on Syria — among over 1,000 people.

On Wednesday, nearly 1,500 Germans took to the streets of Berlin to protest against the US-led strikes on Syria and call for an end to war, according to the left-wing Die Linke party, which organized the rally.

'PM is Lying': Norwegian TV Star Raising Money to See Syrian War With Own Eyes
Earlier this month, a number of media outlets and Western countries accused Damascus of using chemical weapons in Duma, located in the Damascus suburb of Eastern Ghouta, on April 7. The Syrian government and Russia have refuted the allegations, saying that the attack in Duma was staged by militants and the White Helmets volunteer organization to influence public opinion and justify possible intervention.

On April 14, the United States, France and the United Kingdom carried out a missile attack on a number of targets in Syria, including the facilities in Barzeh and Jamraya, in response to an alleged attack in Duma. According to the Russian Defense Ministry, a total of 103 cruise missiles were launched by the United States and its allies, 71 of which were intercepted by Syria’s air defenses.

German Foreign Minister Heiko Maas ruled out on April 14 Germany's participation in the strikes on Syria and stressed that Berlin would use all diplomatic ways to resolve the issue of controlled destruction of the chemical weapons allegedly remaining in Syria.