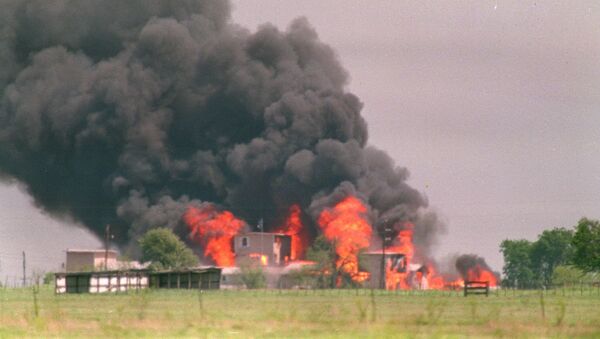 © AP Photo / Susan Weems, File
Subscribe
On April 19, 1993 the new US Attorney General, Janet Reno, ordered federal agents to move in to arrest the leader of a religious cult who was holed up in a compound in Waco, Texas, leading to the death of 76 people, 28 of them children. Sputnik looks at the Branch Davidians and four other deadly cults.

Relatives of those who died in Waco 25 years ago will remember the dead on Thursday, April 19.

But some survivors still revere David Koresh, the leader of the Branch Davidians, who perished in the flames on that day. He was one of a number of charismatic cult leaders who led their followers to death.

Ian Haworth, who has been running the Cult Information Centre in the UK since 1987, said they actually "recruit smart people".

"People have the misconception that these are people who are easily led or not very intelligent, but that is not the case at all," Mr. Haworth told Sputnik.

He said the "mind control" techniques used by cults were the same as those used to recruit people to Daesh.

The Branch Davidians were actually founded in 1929 by Victor Houteff, after splintering from the Seventh Day Adventist Church.

Houteff died in 1955 but the group, based at Mount Carmel outside Waco, continued and in 1981 David Howell joined them and soon became their leader. 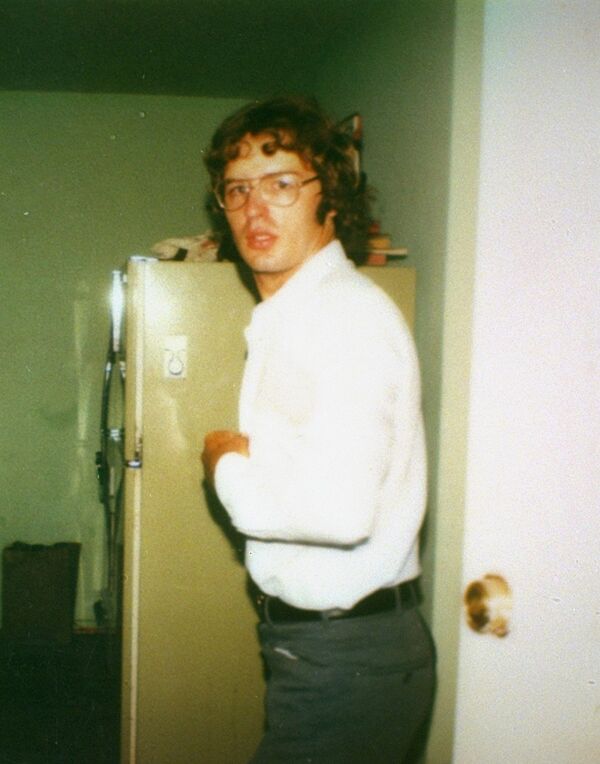 Howell — who changed his surname to Koresh after the Biblical king Koresh (Cyrus) — was a charismatic figure who claimed to be the Messiah and even persuaded parents to let their under-age daughters have sex with him.

As the federal authorities probed what was going on at Mount Carmel, Koresh started buying up weapons for a showdown.

The ATF would later claim Koresh had 136 assault rifles and handguns and 200,000 rounds of ammunition, as well as grenade launchers.

On February 28, 1993 the ATF decided to raid the compound to arrest Koresh for illegal possession of weapons.

But Koresh got wind of the impending assault and a two-hour gunfight broke out, in which four ATF agents — Conway LeBleu, Robert Williams, Steven Willis and Todd McKeehan — were killed.

On 48 hours tonight, A female cult survivor said:"David Koresh made everyone fear the outside world." When asked what they were told was beyond the gate of the compound, she said, "Bad people". #JehovahsWitnesses #CultLingo #DontLetYourFearControlYou #TheMoreYouKnow #jworg

For the next 51 days the two heavily armed sides were engaged in a tense stand-off while hundreds of journalists from around the world descended on the small town in Texas.

When the ATF stormed the building with armored vehicles the compound caught fire — or was possibly set alight from inside — and rapidly burned down.

Koresh's body was found with a self-inflicted gunshot wound.

He had apparently persuaded his followers the attack by the ATF would bring about the Apocalypse.

Four years after the Waco siege another American group tried to speed up the Apocalypse.

The Heaven's Gate group were founded in southern California in the early 1970s by Marshall Applewhite and Bonnie Nettles.

They met when Applewhite was a patient and Nettles a nurse at a psychiatric institution.

She died in 1985 but Applewhite kept the group together and when the internet was invented in the early 1990s they were early adopters and made a steady income as website designers.

Applewhite had been brought up as a Presbyterian — his father was a minister — but his cult's theology was a mixture of Christianity and a belief in aliens.

He, like Koresh, claimed to be the second coming of Jesus Christ, but said God lived on another planet.

After years of prophesizing about the "end times" Applewhite finally saw a sign of the Apocalypse.

US newspapers were full of articles about the Hale-Bopp comet, which was passing Earth.

An amateur astronomer, Chuck Shramek, had claimed to have taken a photograph of a UFO following Hale-Bopp and Applewhite seized on this as proof of the existence of an alien plan to wipe out or "recycle" Earth.

He told his followers they could only survive if they took their lives as Hale-Bopp passed and they would then be lifted up onto the spaceship. Sadly 39 of them believed this hogwash.

On the night of March 19/20, wearing identical black tracksuits and sneakers, they ate apple sauce laced with huge amounts of barbiturates and washed it down with vodka.

They then put bags over their heads, purple shrouds over their bodies and waited for the "rapture".

The bodies were found at a compound in San Diego a week later.

Only one man survived — Rio D'Angelo — but their website is still going to this day.

Jim Jones was a charismatic preacher who was born in Indiana and flouted with communism as a young man.

He formed the People's Temple and recruited many followers before relocating to California.  Many of his followers were African-Americans.

Jones grew tired of the restrictions of life in the United States and he persuaded his followers to move to an isolated compound in Guyana, which was quickly dubbed Jonestown.

Jones' group, which he called the People's Temple, became internationally infamous on November 18, 1978, when a horrific man-made catastrophe overtook Jonestown.

After a disastrous fact-finding visit by US Congressman Leo Ryan, Jones persuaded hundreds of his followers to kill themselves and their children.

Ryan had been shot dead by several People's Temple followers as he prepared to fly out of Jonestown and Jones probably knew the Guyanese authorities would close down his compound as a result.

The authorities eventually discovered 918 bodies and a horrific audio recording of their last moments was also found, in which he tells some of the children not to cry.

"I'm tired of it all…we need to step across…can some people assure these children that they will stepping over onto the next plane. We don't like the way the world is…this is a revolutionary suicide protesting at the conditions of an inhumane world," says Jones on the tape.

For years the myth has persisted that they drank Kool-Aid laced with potassium cyanide.

In fact it was not Kool-Aid, but a home-made punch.

Charles Manson, who died of cancer in November last year, was the founder and leader of a cult which wrought havoc in California in the 1960s. 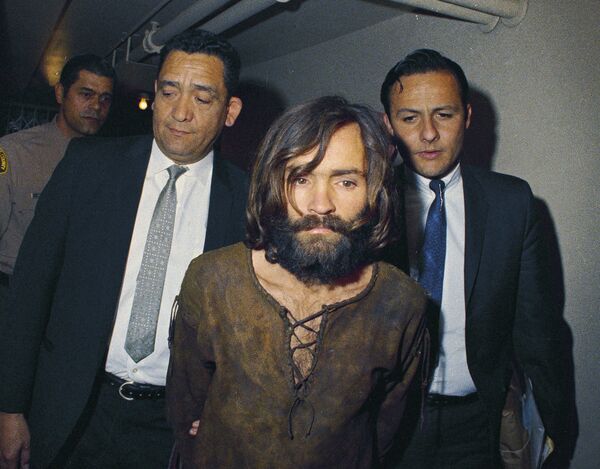 In this 1969 file photo, Charles Manson is escorted to his arraignment on conspiracy-murder charges in connection with the Sharon Tate murder case
© AP Photo / File

Born Charles Milles Maddox, he was a convicted felon who changed his name and formed a hippie commune after recruiting a number of impressionable young men and women.

The end of the 1960s was a period when an era of psychedelic drugs and "free love" was coming to an end and violence and racist antipathy was on the rise.

Manson convinced his followers that a race war was approaching.

His followers perpetrated a series of brutal murders in 1969 that claimed the lives of seven people, including actress Sharon Tate, the wife of film director Roman Polanski, who was pregnant at the time of her death.

Manson would claim the murders were committed in an attempt to trigger an apocalyptic race war between whites and blacks which Manson himself named Helter Skelter, after a song by The Beatles.

Although he himself did not kill anybody Manson was convicted of first degree murder and received the death penalty, which was later changed to life without parole.

Manson, who had a swastika tattooed on his forehead, never once showed any remorse.

"I haven't done anything I'm ashamed of…maybe I should have killed 400 or 500 people then I would have felt better, felt like I'd really offered society something," Manson told a TV journalist in a prison interview in 1987.

The Order of the Solar Temple was founded in 1984 by Joseph Di Mambro and Luc Jouret and had cells in Switzerland, France, and Canada.

Jouret, a homeopathic doctor who claimed to be a reincarnation of Christ, would choose female members of the cult to have sex with before religious ceremonies.

He claimed the sex gave him "spiritual strength".

The Solar Temple claimed the Earth would be destroyed in the 1990s but its members could escape to a higher spiritual plane by taking their own lives.

On October 5, 1994, the authorities in Switzerland and Quebec found 53 members of the cult dead in buildings which had been set on fire.

Jouret and Di Mambro were among the dead.

A year later another 16 killed themselves and in March 1997 a further five immolated themselves, after which the cult faded from the headlines.

000000
Popular comments
Now learn some truth about Waco... www.whatreallyhappened.com/RANCHO/POLITICS/WACO/waco.php WARNING some images might be disturbing. As for Manson, I wonder how many people know Angela Lansbury from Murder she wrote fame let her teenage daughter run around with Manson? Enjoy this interview about re-examining the Manson murders from someone who isn't in the msm. www.youtube.com/watch?v=iTCMk2ziiFY
Eurofolk radio girl
19 April 2018, 12:12 GMT1
000000
This is a story written by and/or forwarded by a CAI asset. Why ? Any independent journalist would have stumbled upon the implication of the CAI in the Jones town episode. This article leaves it out completely. Suspect! Anyone is planning a false flag on a "cult" he does not like and is preparing the public opinion for this? It looks like.