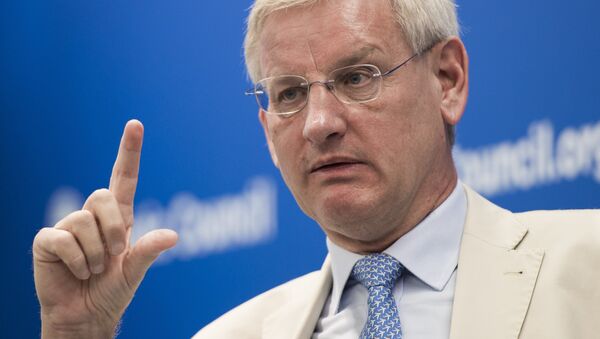 A portrait medallion of former Prime Minister Carl Bildt has been ceremonially unveiled in the Swedish parliament. While the 68-year-old himself has claimed he was "deeply honored," social media users found the avant-garde portrait somewhat grotesque.

"Of course, I am deeply honored with a medallion on a wall here in the parliament which is the focal point of our people's democracy, and in which I have acted in one way or another, including my time as prime minister, for almost half a century," a proud Carl Bildt said in a press release.

By his own admission, he was most honored by the fact that the medallion was placed next to that of former Center Party leader Thorbjörn Fälldin, Sweden's first Prime Minister to break the Social Democrats' hegemony of the mid-20th century.

​On social media, however, many Swedes found the modernist artwork repellent. Furthermore, several pointed out that Bildt looked like an ent, mystic creatures from J.R.R. Tolkien's saga "Lord of the Rings" which resemble talking trees. Social Democrat Anders Eriksson, however, didn't have any problem with that, calling the idea "fantastic."

​Another user ventured that the portrait resembled a cone.

​In yet another take, Bildt's portrait was likened to the BFG, Big Friendly Giant, the protagonist in the children's story with the same name by Roald Dahl.

​Carl Bildt himself reacted to the criticism rather lightly, venturing that the portrait hopefully won't scare away too many people from the parliament.

I hope this will not scare too many people away from the Parliament building in Stockholm. pic.twitter.com/Hro54n2dbI

​Norwegian Prime Minister Erna Solberg, however, saw similarities with Norwegian trolls, to which Bildt tweeted that he didn't see anything wrong with that.

​According to the Swedish parliament, Carl Bildt himself chose sculptor Rune Rydelius among three candidates. The work began in 2016. The medallion was first modeled in clay after which a gypsum cast was made. Ultimately, the portrait was made in environmentally-friendly bronze.

Bildt served as Sweden's PM from 1991 to 1994 and Foreign Minister from 2006 to 2014. He also led the Conservative Party from 1986 and 1999. Internationally, he is remembered for his efforts as mediator during the Balkan wars as well as being one of the architects of the EU's policy in the East, particularly Ukraine. In 2015, Bildt was appointed to Ukraine's International Advisory Council on Reforms under President Petro Poroshenko.