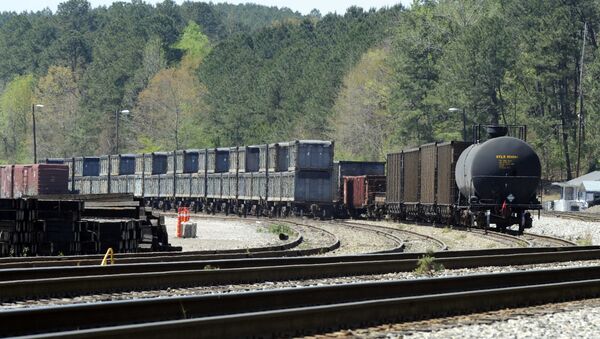 © AP Photo / Jay Reeves
Subscribe
International
India
Africa
Southern states are frequently used for creating landfills where waste from all over the US can be dumped, due to stricter legislation in the northern ones.

Inhabitants of Parrish, Alabama have faced severe environmental problems after a small town nearby, West Jefferson, banned trains from New York carrying waste to the Big Sky Landfill, from entering their city. The cargo trains with putridly stinking sludge stopped in Parrish in January and have remained there ever since, spreading their smell to nearby playing fields.

"Oh my goodness, it's just a nightmare here, it smells like rotting corpses, or carcasses. It smells like death," the Parrish mayor said.

Local legislature couldn't prevent the Big Sky Environmental LLC from leaving the train near the city, although the stench made the inhabitants' lives a living nightmare, not to speak of the fly infestation afflicting the surrounding areas.

We can do better. This is unacceptable: "In Parrish, Alabama, population 982, the sludge-hauling train cars have sat idle near the little league ball fields for more than two months, Mayor Heather Hall said." https://t.co/D81gDBPlVh via @mgmadvertiser

New York temporarily halted its shipments of waste to Alabama and the Parrish mayor is hoping that the cargo train will soon be removed. For now, however, the townspeople will have to endure the unbearable stench.

New York, as well many other states, especially in the north, have adopted strict environmental laws that limit the creation of landfills there, forcing their operators to move to southern states with less strict legislature. The situation has especially worsened after New York imposed a ban on dumping waste water into the ocean.