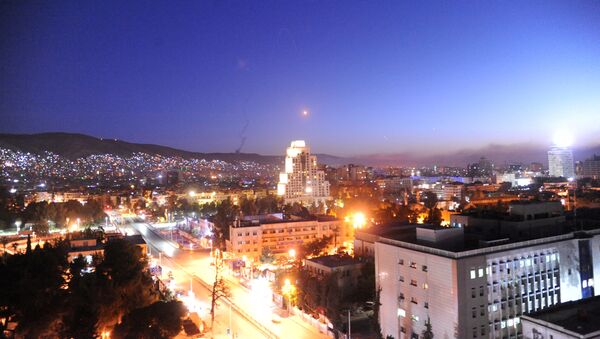 © REUTERS / SANA
Subscribe
On April 14, the United States, France and the UK fired over 100 missiles at multiple targets in Syria in response to the alleged use of chemical weapons by government forces in the city of Douma in Eastern Ghouta. Almost two-thirds of the rockets were shot down, according to Russian military.

According to Viktor Murakhovsky, member of the advisory council of the Russian Military-Industrial Commission, two cruise missiles that had failed to detonate during the US-led strike on Syria and were reportedly handed over to Russia by the Syrian military may come in handy for Russian specialists.

“These findings may be very useful for our country. Russian experts do not copy western arms patterns, since we have our own development strategy, but it will be interesting for them to get acquainted with the latest western developments in this field. Some missiles, used to strike Syria, were not new, while others were exploited for the first time,” Murakhovsky told Sputnik.

The missiles found by the Syrian forces were reportedly transferred to Russia on April 18, and, as Murakhovsky explained, they will be of special interest because the rockets were quite new.

“It would be interesting to look at the American missile – JASSM-ER – that the US used in the battlefield for the first time. Studying these rockets will help Russia improve its missile defense systems and electronic warfare systems,” the military analyst elaborated.

Nearly a week ago, a trilateral alliance, comprised of the United States, France and the United Kingdom, delivered a massive missile strike on numerous Syrian targets as retaliation for an alleged chemical weapons attack perpetrated by the Damascus government in the city of Douma which supposedly took place on April 7.

According to the Russian Ministry of Defense, a total of 71 rockets out of the 103 cruise and air-to-surface missiles were shot down by Syrian air defenses. The airstrikes came on the same day that the Organization for the Prohibition of Chemical Weapons was set to launch a fact-finding mission and inspect the site.

German Party Lambasts Strikes on Syria: 'Weapons Don't Make Peace' (VIDEO)
The West’s decision to hit Syria with over a hundred of missiles was triggered by reports, covered in several media outlets, citing militants in Douma claiming the Syrian government forces had dropped a chlorine bomb on civilians – information that was “substantiated” by the White Helmets-provided footage, showing the aftermath of the alleged use of chemical weapons.

Both Damascus and Moscow dismissed the claims, slamming the entire incident as a false flag, with the Russian Defense Ministry sending a chemical corps commission to Douma to investigate the alleged use of toxic agents, days after the reports emerged on media; the expert group did not find any traces of chemical poisoning either with chlorine or sarin.

000000
Popular comments
So, they decided to test new missiles, but these ended up "enemy hands". Priceless.