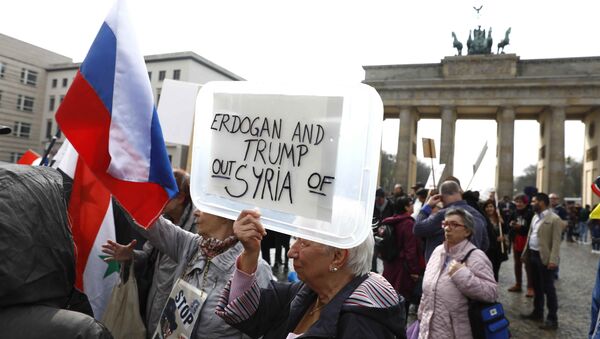 Nearly a week ago, the United States, France and the United Kingdom launched a coordinated missile strike on Syria in response to the alleged use of chemical weapons in the city of Douma in Eastern Ghouta, blamed on Damascus.

German left-wing party Die Linke took to Berlin’s streets to protest against the trilateral strikes on Syria, waving peace flags and calling for an end to war in front of the Brandenburg Gate. The party’s co-chair, Dietmar Bartsch, delivered an eloquent speech in front of the crowd, slamming Germany’s role in the ongoing conflict in Syria as a weapons exporter.

At the same time, Sahra Wagenknecht, his co-chair, didn’t mince words while criticizing US President Donald Trump’s approach to relations with Russia.

“Where air raids are announced from one nuclear power to another nuclear power via Twitter, one thinks we’re in the wrong movie. But it would be far too simple to say, ‘Okay, there is a mad man in the White House, he wrote a tweet incorrectly and brought us all into danger.’ No, it’s still close. It is an escalation, where one step comes after the next,” she said.

Earlier this week, Steffen Seibert, German government spokesman, said that the country had not received a “request” for military involvement in Syria, yet emphasized that Germany supported those “who were outraged by yet another use of chemical weapons by the regime” of Syrian President Bashar al-Assad.

READ MORE: Germany Was Not Invited to Take Part in Conducting Strikes on Syria – Berlin

On April 14, the United States, the UK and France carried out a joint missile strike on a number of targets in Syria, describing the attack as a retaliatory measure to an alleged use of chemical weapons by government forces in the city of Douma.

The missiles were launched a week after several media reported, citing militants on the ground that the Assad army had dropped a chlorine bomb on civilians in Douma, with the White Helmets offering unverified footage of the aftermath of the alleged attack. While the Syrian government strongly denied its involvement, denouncing the entire situation as a false flag, the Western nations were quick to blame the incident on Damascus.

OPCW Head Says UN Security Team Shot at in Syrian Douma - Reports
The attack on Syria came the same day the Organization for the Prohibition of Chemical Weapons (OPCW) was due to start its fact-finding mission in Douma to probe the alleged chemical weapons’ use.

Meanwhile, the Russian Defense Ministry sent a chemical corps commission to the alleged site to investigate the purported use of chemical weapons several days after the media reports emerged; the commission found no trace of toxic agents in Douma after the expert group questioned witnesses and medical workers.