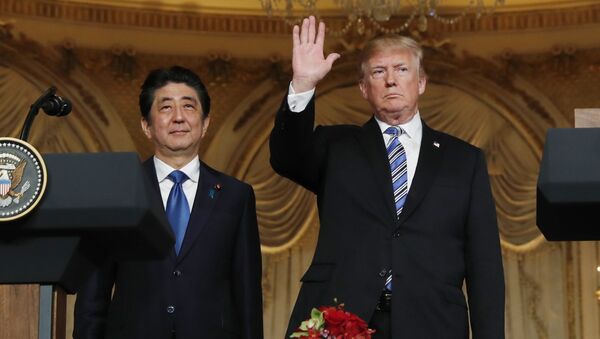 Vijay Prashad, executive director of the Tricontinental Institute of Social Research, told Radio Sputnik's By Any Means Necessary that the close dialogue between Japan and the US may boost Japan's "prestige" in northeastern Asia and could also help improve Abe's reputation as his administration weathers a growing number of corruption scandals.

​"Japan has not been a major player in northeast Asia and has been utterly been left out of the nuclear conversations," Prashad told hosts Eugene Puryear and Sean Blackmon. "This is a major blow to the prestige of Japan and of Shinzo Abe.

In December 2017, Japan purchased ground-based military interceptors from the US to counter the threat posed by North Korea's ballistic missiles. "The Japanese government has made it clear that it is worried about the short-range and medium-range missiles the [North] Koreans have developed with the capacity to destroy Japan. The US has provided anti-missile weapons to their allies, but these systems are not foolproof and the Japanese are worried.

However, Japan in some ways also actually benefits from the North Korean crisis, Prashad argues.

"The ruling elite in Japan can benefit from having the American military shield around Japan because of the North Korean threat. It's a big security apparatus. Although ordinary people in Japan are deeply opposed to the US footprint in Japan, this has been beneficial to Japan from an economic standpoint as Japan has been able to utilize protectionist policies," Prashad said.

On Saturday, tens of thousands gathered in front of the National Diet Building, seat of Japan's legislature, in central Tokyo to protest scandals surrounding Abe's administration.

Protesters accuse Abe of helping Kotato Kake, the director of Kake Gakuen, a school operating company, establish a veterinary school in a special deregulation zone in 2017. Abe has repeatedly denied claims that he allowed officials to give Kake preferential treatment for the establishment of Japan's first new veterinary school in over 50 years.

Abe and his wife Akie are also accused of being involved in the discounted sale of state-owned land to Moritomo Gakuen, another school operator, with connections to Akie.

Last weekend, demonstrators held up signs saying, "Do not allow Abe-style politics" to protest against Finance Ministry officials' alleged falsification of documents in connection to the two scandals. Other protesters carried signs calling Abe a "liar" and demanding his resignation.

"The large number of people gathering is due to growing anger," said protester Takeshi Suwahara, according to the Japan Times.

"A strong sense of crisis is spreading — people now sincerely feel they have to speak out for what is right."

The scandals have decreased Abe's approval rating to an unprecedented low and have raised questions over whether he can a win a third term in the upcoming September elections. However, according to Prashad, even though Abe is in a difficult situation in Japan, "a seat on the table" with the US regarding North Korea "may improve his position" as he takes a more active role in regional politics.