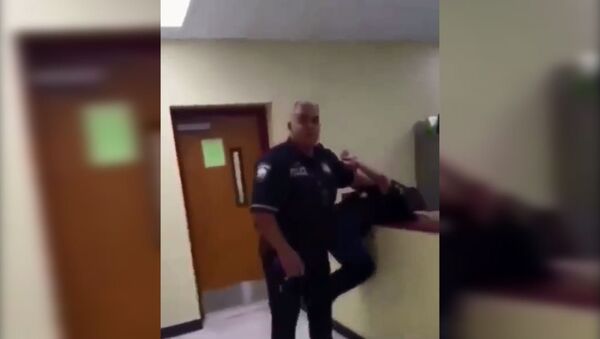 A police officer in San Antonio, Texas, was caught on camera harshly arresting a 16-year-old girl, who he can be seen pinning in suspension to a counter. The viral video has incited cries over perceptions of excessive force and anti-Latino racism.

An officer was called to Por Vida Charter High School Wednesday in a request to remove a woman who was refusing to leave the school's office. A girl, 16-year-old Tiffany Rodriguez, believed the officer was treating the woman he was called to remove unfairly. Rodriguez says that the woman could not speak English and was attempting to assist her.

Accounts from both the San Antonio Police Department and Rodriguez paint the same picture: the situation became confrontational when the girl used expletives.

Rodriguez's best friend, Casandra Ortiz, was in the office with her. Police told Fox 29 San Antonio that the teenagers had gotten in trouble for being out of uniform, tardiness and swearing, and were in the office for that reason. Ortiz's mother, Jessica Villarreal, rushed in to record the unfolding events when she heard Rodriguez screaming.

Rodriguez was booked in juvenile detention on charges of resisting arrest and disorderly conduct. She said her arm and shoulder had to be examined for injuries after the arrest.

Police say the officer was wearing a body camera at the time and claim Internal Affairs will review the footage, which police say they have not yet done, as part of an investigation.