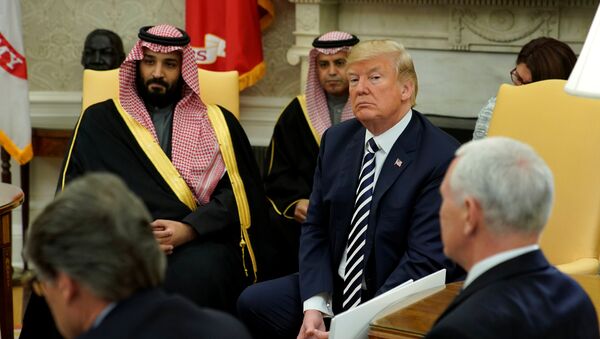 Washington is determined to maintain control over northern Syria, currently held by the US-backed Kurdish militia. Donald Trump is seeking to shift the burden of military responsibility onto Arab states, which means that the US occupation of Syrian territories will continue, American author Brandon Turbeville has told Sputnik.

"The only legitimate Syria policy on the part of the United States is the immediate and complete withdrawal of all military forces from Syria, as well as an immediate end to the funding, training, and directing any and all terrorists or so-called 'opposition forces' in the country," Brandon Turbeville, the author of seven books, one of them being "The Road To Damascus: The Anglo-American Assault on Syria," told Sputnik.

On March 29, US President Donald Trump dropped the hint about the withdrawal "very soon" of US troops from Syria. Following the US-led coalition's April 14 joint strike on Syria, the White House reiterated Trump's pledge in response to French President Emmanuel Macron's assumption that he had managed to convince his American counterpart to stay in the region.

Gulf States Reportedly Reach Blackwater to Discuss US 'Arab Force' Plan in Syria
However, the Wall Street Journal reported on April 16, that a US official had requested funding and military resources from Saudi Arabia, Qatar and the United Arab Emirates to maintain Syria's security once Daesh (ISIS/ISIL)* is completely defeated.

Earlier, during an April 3 summit with the leaders of the Baltic States, the US President had suggested that Washington could continue its military presence in Syria if the Gulf States provide necessary funding.

"Saudi Arabia is very interested in our decision, and I said, 'Well, you know, you want us to stay, maybe you're going to have to pay'," Trump said, commenting on his decision to pull out of the region.

"But, as we have seen elsewhere, just because American boots aren't on the ground en masse does not mean that an imperialist war is not taking place," the author stressed. "Turning over military 'responsibility' to Saudi Arabia or other GCC [the Gulf Cooperation Council] forces is not an end to Western imperialism, it is a delegation of 'responsibility' to junior actors referred to as 'regional players'."

Macron Needs Trump's Support for Pursuing Active Middle East Policy - Analysts
The writer referred to the ongoing war in Yemen and Saudi Arabia's military actions in the country, which added to the havoc to the region. According to Turbeville, if  the Gulf States' military forces replace US troops on the ground in Syria, the Arab republic would repeat Yemen's fate. On the other hand, if Arab forces fail to accomplish the task, Washington would re-deploy its forces in the region, he suggested.

"So this really isn't a pullout at all," Turbeville emphasized. "It's an attempt to continue Western imperialist policies while getting credit at home for disengaging abroad. Trump's suggestion that American forces could extend their stay in Syria if Arab countries pay for the American military's services are evidence of this."

According to the author, the ongoing debate over the US' potential pullout is "nothing more than a negotiating strategy to ease the burden on the US in Syria."

Turbeville highlighted that President Trump "has essentially designated the American military as mercenaries for hire, willing to occupy foreign nations in violation of international law not only for its own geo-strategic aims but also for the right price."

US Establishes New Military Base in Syria's Oil-Rich Deir ez-Zor - Reports
Meanwhile, contrary to Trump's pullout pledge, the US is reportedly continuing to establish its bases in northern Syria. According to an April 3 report by the Anadolu Agency, the Pentagon set up two bases in Manbij, while the Fars news agency says yet another base has been established in Deir ez-Zor's al-Tanak oilfield, controlled by the Kurdish militia.

It has also been reported that the founder of the American private security contractor Blackwater, known as Academi since 2011, Erik Prince was allegedly contacted by Arab officials who sought to form a military force in Syria. Prince reportedly said that he was waiting for Trump's decision on the matter.

The Blackwater mercenary army was founded in 1997. In September 2007 the private company's employees shot 17 Iraqi civilians dead and injured 20 more in Nisour Square, Baghdad, while providing security to a US embassy convoy. Since then the contractor has been banned from working in the country by the Iraqi government.

The views and opinions expressed by Brandon Turbeville are those of the speaker and do not necessarily reflect those of Sputnik.