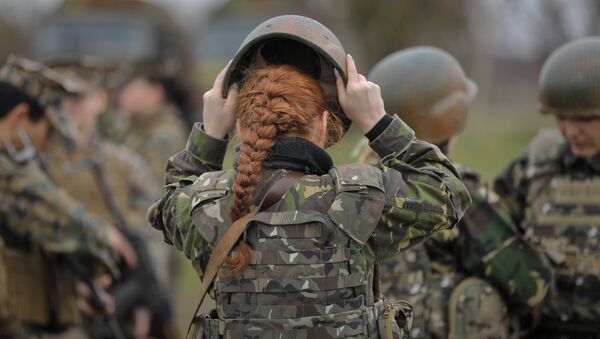 © AP Photo / Vadim Ghirda
Subscribe
According to a Swedish government institution, NATO uses too many illustrations of combat vehicles and aircraft in their self-portrayal instead of attracting women with more comfortable duties, such as policy work, development and counseling.

NATO has a "long a way to go" before it finally becomes gender equal, the Swedish Defense Research Agency (FOI) said in its evaluation.

In June 2017, the FOI received the honorable task of reviewing and evaluating the way NATO's gender policy adopted in 2010 has been implemented. Sweden is not a NATO member, rather opting to remain non-aligned, but maintains strong ties to the organization.

According to gender researcher Helené Lackenbauer of the FOI, NATO's failure and shortcomings in gender issues depend, among other things, on "incomplete leadership."

"The fact that the senior management supports gender-related work, as well as that there are both a policy and a plan of action in place are important prerequisites. However, already at this level there are shortcomings with NATO for lack of clear objectives for the plan of action," Lackenbauer said in a press-release.

​Lackenbauer called for NATO managers to shoulder more responsibility for what is happening within their organization in order for gender work to progress.

"It must affect pay, promotions and career opportunities, otherwise the development will not speed up," FOI stressed, calling for more women in positions of influence and power.

At the same time, however, the Swedish research institute stressed that both men and women must be given the opportunity to combine professional careers with family life.

Yet another complaint lodged by the FOI deals with NATO's employment policy and self-projection in social media.

"Social media illustrate the organization with combat vehicles and aircraft," complained the FOI, slamming the fact that it does little to highlight the more comfortable tasks that would attract more women. "It doesn't appear that there is a wide range of services, such as policy work, counseling and program management. It makes it difficult to recruit women to higher positions, but it's also hard for women who've already been recruited to stay where they are," the FOI wrote.

Lastly, Helené Lackenbauer also raised the problem of insufficient knowledge on how to integrate the gender perspective into NATO's daily work.

"Everything is in place, but not much is happening. It seems difficult to take it to the next level," Helené Lackenbauer stressed.

"I think we have the power to move mountains. To me, feminism and the strive for gender equality compound a modern view of global politics. Change is possible, necessary and long overdue", said @margotwallstrom in her concluding remarks of #StockholmGenderForum pic.twitter.com/IflsCLgQYd

​For Sweden's overtly feminist government, promoting gender issues is one of its top priorities. "Sweden has the world's first feminist government, which means that gender equality is crucial to government priorities in decision-making and allocation of resources," the government's website said. To support this cause, Sweden pledged earlier this month to invest SEK 1 billion ($120 million) in global gender equality efforts over the coming years. The money is expected to be distributed via the Sida assistance organization between 2018 and 2022.

The Swedish Government is now investing 125 million US dollars in global gender equality to promote the rights of women and girls: https://t.co/UEU7yMQLQL #GenderEqualWorld #StockholmGenderForum @IsabellaLovin pic.twitter.com/zvtrBzsNxP

Thanks to #WikiGap, over 3 000 new or expanded articles about notable women have been added to the world's largest encyclopaedia. Now it's time to pass on the baton. Care to pick it up? https://t.co/xdACC5tSKV @Wikimedia pic.twitter.com/95iQ7D1cW2

000000
Popular comments
Attracting women with more comfortable duties, such as policy work, development and counseling sounds a bit sexist to me. Israel puts their women on the front line (whether you agree with Israel's wars or not). There already appears to be a disconnect in Sweden between those in comfortable jobs making policy and those who enjoy the consequences of those policies. Perhaps putting more Swedish women on the front line might provide a healthy dose of reality to shape future policies, assuming any of them survive the coming war with Russia.
Grumpy
18 April 2018, 14:40 GMT
000000
Newsfeed
0
New firstOld first
loader
LIVE
Заголовок открываемого материала
Access to the chat has been blocked for violating the rules . You will be able to participate again through:∞. If you do not agree with the blocking, please use the feedback form
The discussion is closed. You can participate in the discussion within 24 hours after the publication of the article.
To participate in the discussion
log in or register
loader
Chats
Заголовок открываемого материала
Worldwide
InternationalEnglishEnglishMundoEspañolSpanish
Europe
DeutschlandDeutschGermanFranceFrançaisFrenchΕλλάδαΕλληνικάGreekItaliaItalianoItalianČeská republikaČeštinaCzechPolskaPolskiPolishСрбиjаСрпскиSerbianLatvijaLatviešuLatvianLietuvaLietuviųLithuanianMoldovaMoldoveneascăMoldavianБеларусьБеларускiBelarusian
Transcaucasia
ԱրմենիաՀայերենArmenianАҧсныАҧсышәалаAbkhazХуссар ИрыстонИронауОssetianსაქართველოქართულიGeorgianAzərbaycanАzərbaycancaAzerbaijani
Middle East
Sputnik عربيArabicArabicTürkiyeTürkçeTurkishSputnik ایرانPersianPersianSputnik افغانستانDariDari
Central Asia
ҚазақстанҚазақ тіліKazakhКыргызстанКыргызчаKyrgyzOʻzbekistonЎзбекчаUzbekТоҷикистонТоҷикӣTajik
East & Southeast Asia
Việt NamTiếng ViệtVietnamese日本日本語Japanese俄罗斯卫星通讯社中文（简体）Chinese (simplified)俄罗斯卫星通讯社中文（繁体）Chinese (traditional)
South America
BrasilPortuguêsPortuguese
NewsfeedBreaking
23:29 GMT5.6 Earthquake Strikes Near Coast of Australia, GFZ Says
23:22 GMTPro-Reunification Candidate Chang Ya-chung Edges Ahead as Chairman Election in Taiwan’s KMT Nears
23:13 GMTTexas Governor Vows to Prevent Del Rio Migrant Surge Disaster From Being Replicated
23:05 GMTUber’s Business Model Faces Threat After Legal Setback Across Europe
22:48 GMTUS Lawsuit Challenges Alliance of 2 Airlines for Stifling Competition
22:30 GMTTaliban Say No Al-Qaeda Members Present in Afghanistan
22:27 GMTJoe Biden Faces Backlash Over Inept UN Speech
22:12 GMTUS Democrats Strike Down $1Bln in Israel Defense Aid to Keep US Govt Running, Reports Say
22:02 GMTPope Jokes ‘Some People Wanted Him Dead’ While He Was Undergoing Surgery, Reports Say
21:33 GMTNo American Dream for Haitians
21:07 GMTBoris Johnson Contradicts Joe Biden With Claim of Intelligence That Taliban Could Take Kabul
21:05 GMTPelosi Accuses GOP of ‘Trying to Force First-Ever US Default’ by Opposing Limit Suspension Bill
20:53 GMTFamily Lawyer Confirms Human Remains Found in Wyoming Belong to Gabby Petito
20:26 GMTFrench President Macron's Health Pass QR-Code Leaked to Internet - Reports
19:37 GMTThe US Space Force’s Oldest Adversary, Social Media, Roasts Their New Uniforms
19:25 GMTTraffic on Motorway in German Bavaria Halted Due to Armed Hostage-Taking Situation - Reports
19:24 GMTJoe Biden, DHS Chief Upset by 'Horrible' Videos of Border Patrol Dealing With Haitian Migrants
19:24 GMTBiden Believes Footage From US-Mexico Border ‘Horrific’ and Supports Probe
19:15 GMTSoldiers Killed in Galwan Valley Clash With India Now Part of Patriotism Lessons for Kids in China
19:14 GMT‘An Unpredictable Ally’: Does the AUKUS Pact Undermine the Quad's Significance?