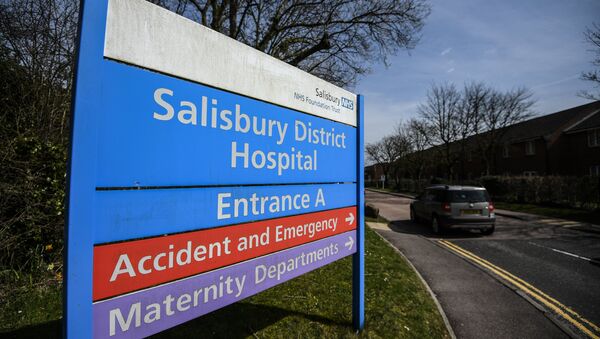 © Sputnik / Alexey Filippov
/
Go to the photo bank
Subscribe
London is ready to give answers to all questions posed by Russia on the Skripal case, the UK's Permanent Representative at the Organization for the Prohibition of Chemical Weapons Peter Wilson stated.

"The precursor of BZ that is referred to in the public statements, commonly known as 3Q, was contained in the control sample prepared by the OPCW Lab in accordance with the existing quality control procedures. Otherwise it has nothing to do with the samples collected by the OPCW Team in Salisbury. This chemical was reported back to the OPCW by the two designated labs and the findings are duly reflected in the report," head of the Organization for the Prohibition of Chemical Weapons (OPCW) Ahmet Uzumcu said.

The OPCW research results have confirmed British experts' analysis, the UK's Permanent Representative at the Organization for the Prohibition of Chemical Weapons  Peter Wilson stated, speaking at the OPCW Executive Council Meeting.

According to the UK Ambassador to the OPCW, four OPCW-designated laboratories did not find the substance BZ in any of the samples collected in Salisbury. Still, London and the OPCW research haven't determined the nerve agent country of origin and production location, the UK Envoy noted.

Today’s special #OPCW Executive Council session discusses the OPCW’s report which confirms 🇬🇧 analysis that a Novichok nerve agent was used in #Salisbury. You will be able to read public statements from OPCW members on the website ⬇️ https://t.co/l7EYHRNpaN

"Russia's reckless behavior" violates the ban on chemical arms, according to Wilson.

'We will continue to call out Russia's reckless and indiscriminate behaviour when it violates the CWC, and when it threatens global security.' @PeterWilson to #OPCW ECM 59

The OPCW Executive Council meets today to discuss the independent analysis of the chemical substance used in the Salisbury attack.

Russia Expects Answer From OPCW About of BZ Toxin Presence in Skripal Case
Earlier, a Russian senator had expressed suspicions that the symptoms of Sergei and Yulia Skripal in Salisbury could be characteristic of the use of the BZ-type non-lethal nerve gas which has been previously used by NATO and which is effective on humans for a maximum period of three days.

On April 14, Russian Foreign Minister Sergei Lavrov said that a Swiss laboratory had detected traces of BZ, which has been used by the US and UK armies, in samples sent by the OPCW experts investigating the poisoning of Skripal.

000000
Popular comments
I'm interested in the lab findings of too pure to be true A234. How can someone recover from that? They can't.
Miguelon
18 April 2018, 13:45 GMT3
000000
EuroPox, what is needed to be published are the independent lab reports, their test results - raw - without any OPCW interpretations.