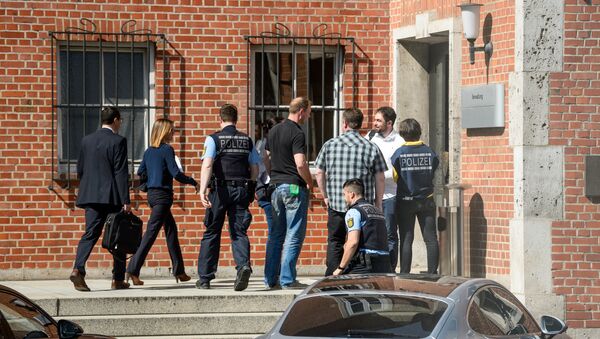 © AFP 2022 / Sina Schuldt/dpa
Subscribe
The searches come just a month after police raided BMW's headquarters in Munich and the company's site in Austria.

Fraud suspicions in connection with the diesel emissions cheating scandal prompted German police to raid the headquarters of VW subsidiaries Porsche and Audi on Wednesday.

As the public prosecutor in Stuttgart announced in the morning, 33 prosecutors and 160 police officers searched a total of ten objects in Germany's federal states of Baden-Württemberg and Bavaria.

The move is a part of a probe into three unnamed individuals who are currently being investigated over their suspected involvement in fraud and false advertising.

"The three accused consist of one member of Porsche's executive board and one senior manager. The third accused no longer works for Porsche," prosecutors said.

The searches come just one month after another leading German carmaker, BMW, was raided by German police over suspicion that the company had installed a special defeat device that downplayed pollution during laboratory tests in about 11,400 cars.

Audi and Volkswagen have also been searched in the past. Now, the sports car maker Porsche is becoming involved in the legal processing of the diesel scandal as well.

The scandal around the usage of emissions cheating software erupted in Germany in 2015 when it turned out that Volkswagen could have falsified emissions test results for its diesel-engine cars.

The issue resurfaced in July, when media reported that leading German automakers had coordinated their actions on matters such as designing diesel emissions treatment systems in diesel vehicles.