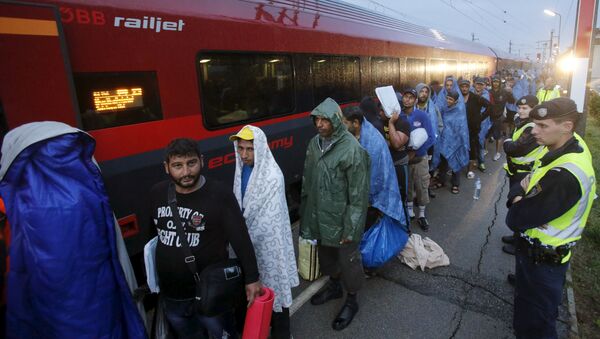 MOSCOW (Sputnik) - The Austrian government has approved a new set of measures to tighten control on migrants arriving in the country, requiring them to pay several hundred euros for basic care, and hand over their phones so that authorities could verify the applicants' identities and how they got to the country.

The draft law stipulates that data from the phones asylum applicants should be evaluated to verify identities, criminalized asylum seekers be arrested and deported, and cash payments of up to 840 euros ($1,040) be paid when applying for asylum as a contribution to basic care. The bill also raises the waiting period for granting citizenship to asylum seekers from six to ten years.

"The new package of foreigners' rights is heading in the right direction: tightening the asylum law and combating abuse," Austrian Chancellor Sebastian Kurz said, commenting on the bill.

In his turn, Interior Minister Herbert Kickl has emphasized that from the very beginning of its term, the federal government has sought for a restrictive and orderly asylum policy and is now following up on its pledge by taking concrete steps.

Dozens Detained in Austria For Drug Dealing Involving Underage Migrants - Police
After the new Austrian right-wing government was formed after the October 2017 parliamentary elections, it was announced that it would change the country's immigration law by tightening the admission criteria.

Prior to the elections, Kurz has repeatedly been calling for tightening border control and curbing undocumented migrants' inflow as Europe has been experiencing a severe migration crisis over the recent years due to the influx of thousands of people fleeing violence in their home countries in the Middle East and North Africa.