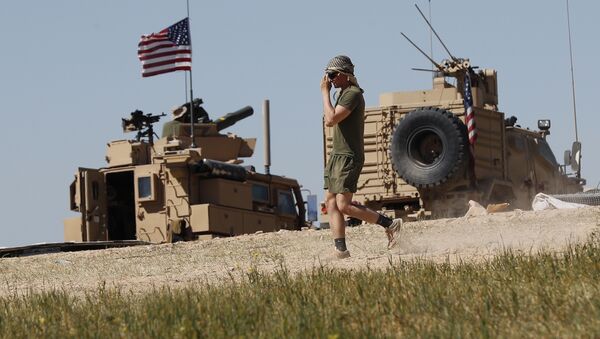 Western countries are trying to solve their domestic problems at the expense of the Middle East, Husnu Mahalli, political analyst specializing on Syrian affairs has told Sputnik Turkey.

[Recently], information has emerged in the press that a search was conducted in the office of Trump's lawyer," Mahalli recalled. "The American president has found himself in an unenviable position. His name regularly appears alongside allegations of sexual harassment."

The Turkish political observer drew parallels between the Trump and Clinton administrations citing Washington's 1998 Operation Desert Fox — a four day bombing campaign in Iraq which lasted from December 16 to December 19. The campaign followed the Clinton-Lewinsky scandal, involving then US President Bill Clinton and White House intern Monica Lewinsky, which erupted in January 1998.

Footage of Douma Attack Staged, so-Called Evidence is 'Fake' - Moscow
On April 14 US, French and British military forces conducted a massive missile strike on Syria over the alleged use of chemical weapons in Douma, Eastern Ghouta, groundlessly blamed on Syrian President Bashar al-Assad by the US-led coalition. According to the Russian General Staff, a total of 71 cruise missiles out of 103 had been intercepted by Syria.

The strike came as "retaliation" for the alleged use of chemical weapons in Douma, Eastern Ghouta, on April 7, which several media outlets blamed on Bashar al-Assad citing sources among the jihadi militants.

Commenting on the supposed chemical attack in Douma, Mahalli referred to a strikingly similar episode that took place a year ago in Khan Sheikhoun, Idlib province. Although the US had not presented any evidence of the Syrian Arab Army's (SAA) involvement in the chemical incident, Washington fired 59 Tomahawk missiles at the government forces Shayrat airfield on April 7, 2017.

The Turkish observer has presumed that jihadists started preparing a chemical provocation in advance, amid the SAA's successful offensive in Eastern Ghouta.

"Speaking at the Security Council Syria's Permanent Representative to the UN Bashar Jaafari… stressed that the Syrian authorities had sent a number of documents and data to the Security Council that reliably confirmed that militants were preparing to use chemical weapons in the territory of Eastern Ghouta, but this data was not taken into account. Thus, the upcoming provocation with chemical weapons was known in advance. The main problem is that last year's incident in Khan Sheikhoun developed according to the same scenario."

US Wanted to Show It's 'in Game' – Ex-Envoy on Missile Attack on Syria
Meanwhile, Turkish President Recep Tayyip Erdogan has praised the US-led coalition's massive missile attack on Syria, claiming that the strike sent a strong message to Damascus. Earlier, following the alleged Douma attack, Ankara had rushed to accuse the Syrian president of the supposed attack.

Having mentioned the large-scale diplomatic row provoked by the UK's groundless allegation that Russia had a hand in the poisoning of former spy Sergei Skripal and his daughter Yulia in Salisbury, England, on March 4, Mahalli suggested that the ongoing political crisis between Russia and NATO member-states could be a prelude for tectonic changes in the Middle East.

He also referred to Saudi Crown Prince Mohammad bin Salman's recent tour of the US, France and Britain.

"Let's pay attention to the fact that during his visit to the US the Saudi crown prince held meetings with almost all high-ranking officials and public organizations — from ex-ministers and the current defense minister to the CIA and the Jewish lobby," the Turkish political analyst noted, adding that the Trump administration had also met with the Qatari leader, Emir Sheikh Tamim bin Hamad al-Thani, and is due to meet with the United Arab Emirates' (UAE) Abu Dhabi Crown Prince Sheikh Mohammed bin Zayed al-Nahyan.

"As a result of this diplomatic 'traffic,' a new plan for the reconstruction of the Middle East is crystallizing, which, of course, will affect Israel," the political analyst opined. "In my opinion, all this indicates that preparations for a cardinal shift in the region are taking place."

Repeat Offenders: A Timeline of American Meddling in Syria from 1947 to Today
Mahalli has stressed that further developments in Syria are largely dependent on Ankara's position: "The main question is what will happen on the ground in Syria, or rather, what will be the actions of the terrorist and radical groups stationed there. The answer to this question is in the hands of Turkey, since it mainly depends on [Ankara] how effectively de-escalation zones created during the Astana and Sochi processes will function."

"Just imagine, currently, there are about 100,000 militants — including Free Syrian Army (FSA) fighters — in the area of the 250-kilometer corridor from Afrin to Jarabulus, all of which are controlled by Turkey," he pointed out.

At the same time, Mahalli has emphasized Russia's decisive role in the region, adding that Iran remains one of Moscow's major allies in the region which is unlikely to retreat despite growing pressure from Washington.

The views and opinions expressed by Husnu Mahalli are those of the speaker and do not necessarily reflect those of Sputnik.