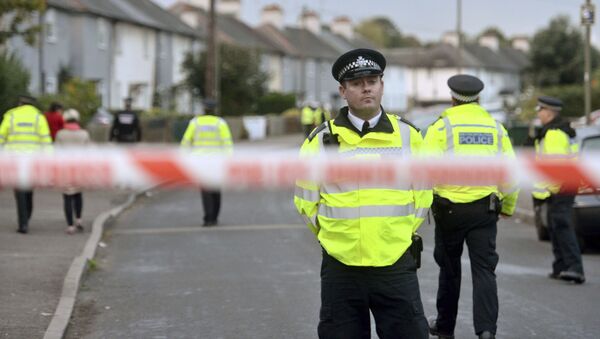 © AP Photo / Victoria Jones/PA
Subscribe
International
India
Africa
Major cities across the UK have witnessed a sharp rise in the number of violent crimes, such as stabbings, being committed. So far this year, 60 people have been murdered in London, with close to 200 murders forecast to occur in 2018 if this trend continues.

The most recent murder took place in the late hours of Monday in the Forest Gate area. The victim – who is believed to be in his late teens – died at the scene at around 23:30 BST on April 16.

The Metropolitan Police Service (MPS) is yet to make any arrests in connection with the murder, but has appealed for eyewitnesses or anyone will potentially useful information to get in touch with them.

"Officers are in the process of informing next of kin," an MPS spokesperson said.

Politicians and locals have taken to social media to express their condolences and anger at this particular murder and the wider wave of violent crime.

I've redrafted this tweet 4 times and there are just no words
I'm angry, my heart aches and I don't know what we do now.
I want to scream at our young people "we love you, pls stop".
I want to yell at politicians! "You're not doing enough!"

Another Knife Death😕at 23.30pm late last night 18 year old found knifed and died at the scene in Forest Gate & Murders are not being solved says Cressida Dick So these Knife Merchants are basically getting away with Murder to kill again something needs to change and fast 🤔🤔

Just a day earlier, on April 15, two people were stabbed to death in the capital in the space of just 40 minutes.

'Lack of Police Numbers' Has Significantly Affected Crime Rate in UK - Analyst
Several ex-police chiefs, academics and politicians have blamed the increase in violent crime on budget cuts to police forces across the UK, with many being forced to significantly cut manpower.

UK Home Secretary Amber Rudd has denied the suspected correlation between the austerity measures and the rise in violent crime, drawing criticism from Brits who feel the government isn’t taking responsibility and has adopted a shortsighted approach to tackling the crisis.

Although London has primarily been in the spotlight, many other parts of the UK are also facing similar problems with violent crime.