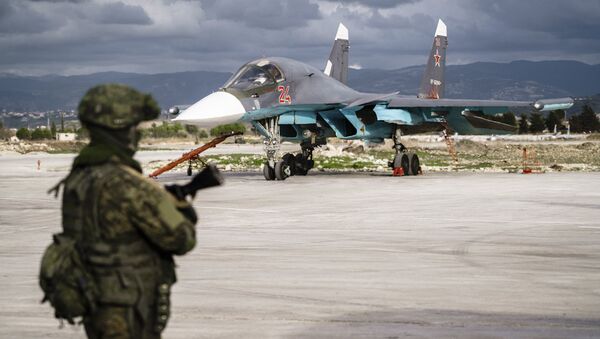 "The discovered substances, such as thiodiglycol and diethanolamine, are necessary for the production of sulfur and nitrogen mustard gas. In addition, a cylinder with chlorine, similar to that used by militants for setting up the wide-spread fake story, was found in the warehouse. It can be concluded that this laboratory was used by illegal armed groups for the production of poisonous substances," Rodionov said, as quoted by the Zvezda TV channel.

The tensions in Syria have increased sharply in the recent weeks after several media outlets, citing Syrian militants, blamed Damascus for using chemical weapons in the city of Duma in the Damascus suburb on April 7. The Syrian Foreign Ministry denied the claims, saying that the use of chemical weapons in Eastern Ghouta may have been planned by terrorist groups.

'This Was a Political Message': Kurdish Parties Condemn US-Led Strike on Syria
On Saturday, the United States, the United Kingdom and France launched 103 missiles on multiple targets in Syria before the results of the investigation of the case by the experts of the Organisation for the Prohibition of Chemical Weapons. The attack has already been slammed by a number of countries, including Russia and Iran.

Meanwhile, the OPCW fact-finding mission was deployed to Syria to probe the allegations of a chemical attack last week. However, on Monday, OPCW Director-General Ahmet Uzumcu said that the mission had not reached Douma yet as Syrian and Russian officials informed it that there were still pending security issues.