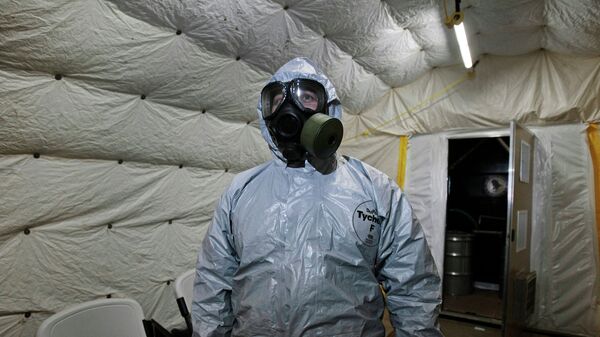 "I would like to remind you that Russia cannot block the work of the OPCW fact-finding team by definition. After all, it was Russia that supported the Syrian government’s request to the director general of the OPCW Technical Secretariat to send an OPCW team to Douma. It is us and the Syrians who are answering to the entire international community, the director general of the OPCW, and finally to the families, relatives and friends of the courageous OPCW inspectors who, despite all difficulties, are determined to fulfill their duty."

"We will not do their bidding. The Russian side does its part of the work exceptionally responsibly, highly professionally and reliably," she stressed.

The French Foreign Ministry said earlier at a briefing Tuesday Russia and Syria continue to deny officials of the Organization for the Prohibition of Chemical Weapons (OPCW) access to the site of the alleged chemical attack in Syria.

"At the moment, Russia and Syria continue to deny access to [OPCW] investigators who arrived in Syria on April 14. The evidence and the main elements are very likely to disappear," the ministry said.

Paris urged Damascus to provide full, immediate and unhindered access to the OPCW investigators to "the places, people or documents for consultations."

At the same time, the French Foreign Ministry noted that the OPCW investigators were not responsible for determining the individuals or entities behind the incident.

"Only a joint UN-OPCW investigation mechanism can do this, but its mandate has not been renewed because of Russia's opposition in the UN Security Council," the ministry underlined.

Earlier in the day, Russian Permanent Representative to the UN Office in Geneva Gennady Gatilov said that the Syrian authorities had created all conditions for the normal work of the OPCW in Syria’s Douma.

Syria Got Rid of Chemical Weapons, OPCW Confirmed Destruction - Russian FM
Last Saturday, the United States, France, and the United Kingdom launched strikes on a number of targets in Syria in response to an alleged chemical attack in the Damascus suburb of Douma.