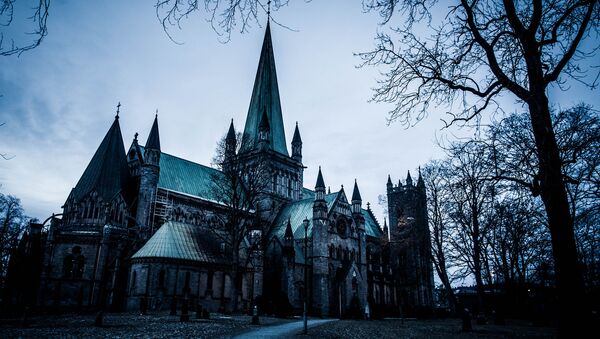 CC BY-SA 2.0 / Kamil Porembiński / Nidaros Cathedral
Subscribe
The Church of Norway, which is experiencing an unprecedented decline in membership figures, has called for open borders in a world with a record high number of refugees.

At this year's Norwegian church meeting, a unanimous resolution has been adopted calling for hospitality toward people fleeing from Syria and other war-torn countries, amid what is described as mounting xenophobia in Europe.

The resolution titled "Show Hospitality" started with comparisons with Jesus.

"Jesus was a refugee. He is a stranger and a refugee, hungry and thirsty. In our time. In our world," the resolution said.

According to the Church of Norway, 65 million people, of whom 22 million are children, are currently fleeing war, conflict, poverty and disasters around the world, which is the highest number since WWII.

"In a world where many people suffer, the answer is not to distance ourselves from suffering and build walls. The church cannot have it this way," the resolution adopted at the end of the annual church meeting said.

The resolution specifically addressed what was described as an "increasing xenophobia" in Europe.

"Europe is paralyzed with growing xenophobia. Fences and walls get set up. Many people never manage to get past them. In fear and fatigue, they wander from border to border. There is no refugee crisis in Norway. Last year, we took only about 3,000 quota refugees, who come to Greece, Italy, Lebanon, Uganda and other countries neighboring conflict areas," the resolution stated.

​Instead of building walls, the Church of Norway called on ordinary parishioners and politicians alike to show hospitality toward refugees and muster courage to show involvement in the community debate. The resolution also included a direct invitation to Prime Minister Erna Solberg of the ruling Conservative Party.

"Dear Prime Minister! Be brave! Show hospitality in words and actions. Work to ensure a proper refugee and asylum policy," the resolution said.

While King Harald V himself, Norway's beloved monarch, previously dared to admit that Norway cannot possibly accept all of Africa, there appears to be no limit to the nation's hospitality as far as the Church of Norway is concerned, which describes itself as "movement of hope."

After a "bumper-crop" year in 2015, when it took in a record 30,000 asylum seekers, Norway has gradually tightened its asylum laws, bringing admission figures to the lowest in the decade.

Meanwhile, the Church of Norway is leaking members at an alarming rate. During the past decade alone, the membership in the Norwegian Church has fallen by ten percent, the Klassekampen daily reported. Should the current rate continue, fewer than half of Norwegians will undergo baptism in the near future.