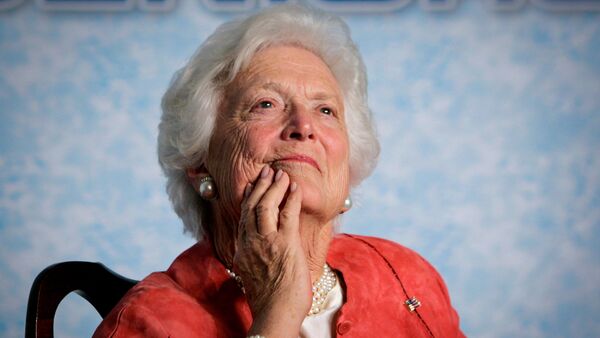 Bush served as both first lady and second lady of the United States, and was also the mother of 2016 presidential candidate and 43rd Governor of Florida Jeb Bush.

During her time as first lady, she founded the Barbara Bush Foundation for Family Literacy, a nonprofit which began a number of educational programs across the country. For her work improving literacy she received The Miss America Woman of Achievement Award in 1997. She was also the recipient of the Award for Greatest Public Service Benefiting the Disadvantaged in 1995.

"It is the most important issue we have," Bush said of her efforts to promote literacy.

She took an interest in the cause after her son Neil was diagnosed with dyslexia, and made frequent appearances on television and radio encouraging parents to read aloud to their children. In 1984, she wrote a children's book called "C. Fred's Story." The book detailed the life of the Bushes from the perspective of the family dog. A second collection, "Millie's Book," also included stories about her beloved dogs.

All proceeds were donated to literacy charities.

In her later years, the foundation was run by her children, Jeb Bush and Dorothy Bush Koch, while she remained an honorary chair.

​As first lady, Bush was uncomfortable with the luxurious lifestyle that sometimes accompanies the presidency. She preferred a small car to a limousine, and tried to journey by train or commercial airline whenever she traveled, much to the chagrin of the Secret Service.

She was also famously disinterested in high fashion, preferring subtler tastes to designer clothes. Many began to emulate the "Barbara Blue" look, a simple dress with her signature three-strand pearls.

A private woman, Bush also argued that personal matters like abortion and homosexuality should be left out of the Republican Party's platform.

"I hate abortions, but I just could not make that choice for someone else," she once said, according to the Daily Telegraph.

She also expressed her support for the Equal Rights Amendment, meant to improve gender equality, even though doing so nearly derailed her husband's chances of becoming Ronald Reagan's vice president in 1980.

In 1988, she became the second future first lady to speak at a national party convention, the first being Eleanor Roosevelt. While she generally stayed out of the limelight during her husband's presidential campaign, those familiar with the campaign say she played an active role in developing strategy.

During a visit to a pediatric AIDS care center, Bush also helped dispel myths about how the disease is contracted. She was photographed holding a baby infected with the virus, at a time when many incorrectly believed that one could catch AIDS through physical contact.

In 1990, she gave a commencement address at Wellesley College alongside Raisa Gorbachev, wife of Soviet leader Mikhail Gorbachev. Confronting criticism from female students that she was too singularly defined by her husband's actions, Bush gave a stirring speech that is now ranked as one of American Rhetoric's Top 100 Speeches of the 20th Century.

"Who knows?" the speech ended. "Somewhere out in this audience may even be someone who will one day follow in my footsteps, and preside over the White House as the president's spouse — and I wish him well."

She also became active with the White House Historical Association, and helped raise $25 million to refurbish and restore the presidential residence.

Born in New York City in 1925, Barbara Bush was the daughter of Pauline and Marvin Pierce. Her father was the president of McCall Corporation, a publishing company behind major American magazines like Redbook, Popular Mechanics, and the Saturday Review.

She was also a distant relative of the 14th president of the United States, Franklin Pierce.

With her three siblings Martha, James and Scott, Barbara grew up in the suburb of Rye, New York. Enjoying bike riding, tennis and swimming, she attended boarding school in South Carolina as a teenager.

At the age of 16, she met her future husband during a dance at Phillips Academy in Massachusetts. They dated for a year and a half and became engaged just before George H.W. went off to serve as a US Navy bomber pilot in World War II.

During the war, he named three planes after his fiancee: Barbara, Barbara II, and Barbara III.

When he returned in 1945, the two were married in Barbara's hometown.

Together, they had six children: George W., Pauline Robinson, Jeb, Neil Mallon, Marvin Pierce, and Dorothy. Pauline died of leukemia at the age of four, a tragedy that greatly affected Barbara Bush.

Frequently on the move, Barbara raised the children while her husband traveled on business. Throughout their marriage, they would move 29 times, though they spent significant time in Texas, where her husband lost a race for the US Senate but later won a seat in the US House of Representatives.

It was during her husband's time as a Texas representative that Barbara first became involved in a number of charity organizations and formed relationships with a number of high-profile diplomats.

George H.W. Bush served as the head of the Central Intelligence Agency in 1976, and the severe secrecy of the job left Barbara feeling isolated.

"I would feel like crying a lot and I really, painfully hurt," she was quoted as saying by US News and World Report.

To overcome her depression, she began volunteer work at a local hospice. She also delivered a number of speeches about the years the Bushes spent in China, when George worked for the US Liaison Office.

Barbara became second lady of the United States in 1980, after George H.W. Bush became vice president under Ronald Reagan. It was during this time that she first began to develop her interest in literacy issues.

Barbara became first lady after George H.W. Bush defeated Democratic rival Michael Dukakis in 1988. Within 100 days of stepping foot inside the White House, Barbara had higher approval ratings than her husband and the vice president.

Life After the White House

George H.W. Bush lost his re-election bid to Bill Clinton in 1992, and the Bush family moved to Houston, Texas in 1993. Barbara continued her work in public service, volunteering with a number of charitable organizations. She became AmeriCares ambassador-at-large, joined the board of the Mayo Clinic Foundation, and supported the Leukemia Society of America, the Ronald McDonald House, and Boys & Girls Club of America.

She also helped plan her husband's presidential library, which was dedicated in College Station, Texas, in 1997.

Bush expressed great pride in her son, George W. Bush, who followed in his father's footsteps to become the 43rd President of the United States after the 2000 election. During his victory speech, George W. thanked both of his parents. "Dad, I am proud to be your son," he said, and praised his mother, "who gave me love and lots of advice. I gave her white hair."

Barbara Bush became the second woman in American history to be both the wife and mother of presidents, following Abigail Adams.

Several elementary and middle schools across Texas are named after the former first lady. The Barbara Bush Children's Hospital in Portland, Maine, is also named for her.

She was the author of two autobiographies, "Barbara Bush: A Memoir, and Reflections."

Bush, in failing health, recently decided to forego further medical treatment, according to a spokesman. Bush suffered from chronic pulmonary disease, which made breathing hard, but she was said to be alert and lively up until the night before she passed away.