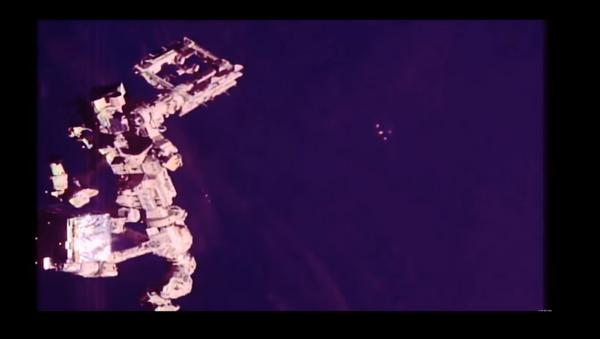 A video captured by NASA’s International Space Station (ISS) live camera on Friday reveals what appears to be a 900-foot triangular UFO in the background.

The object lurking behind the ISS first pops up as three twinkling lights in a triangular shape, disgorging into an orb-like object before slowly fading into darkness.

The video was shared on popular YouTube conspiracy channel The Hidden Underbelly 2.0 on April 13.

​"This UFO appeared on live cam and spit out an orb that quickly came closer to the space station. As the orb left the main ship, it was visible. However, its systems seem to become activated after it left, because it soon cloaked," the YouTube description states.

UFO hunter Scott C Waring of UFO Sightings Daily wrote on his website Sunday, "This UFO is going to blow your mind! It just shows up as a single glowing orb. Then it divides into about 4-6 flashing orbs! During this time, the UFO is partially revealed, meaning it's not 6 UFOs, but one large UFO of about 300 meters diameter."

"The UFO has a more TR3B shape [which is used to describe triangular UFOs]… To see the triangle UFO, pause the video at 1:12 to see it," Waring wrote.

​In his blog post, Waring also speculated that TR3B-shaped UFOs are alien crafts that the "United States Air Force has modified to be flown by humans," suggesting that the spotted UFO was a "top secret government ship."

Others are skeptical that the glowing lights really are UFOs.

Nigel Watson, author of the "UFO Investigations Manual," noted in his book that frequent sightings of UFOs near the ISS are usually caused by reflections and space junk, the Daily Star reported.

Other YouTube viewers agreed with that more mundane theory.

"All the mysterious glowing objects are helicopters simply caught in video with a s****y camera that can't focus the sunlight reflection on its metal. I am not denying that aliens exist, they do, even the head of NASA has said so, but they are not here, we are not the center of the universe, we are a grain of sand in the enormous beach that the universe is," YouTuber NordicParty7 wrote.