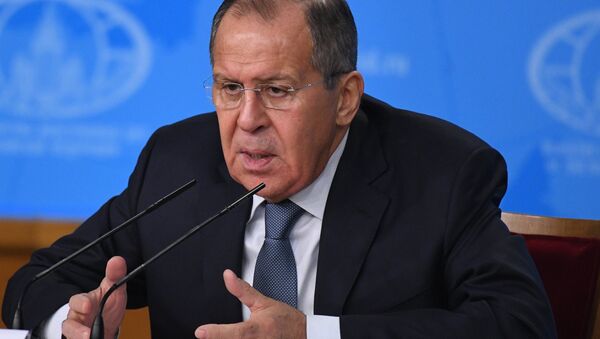 MOSCOW (Sputnik) - Russia expects an answer from the Organisation for the Prohibition of Chemical Weapons on whether the BZ toxin has been found in the samples taken at the place of poisoning of former Russian intelligence officer Sergei Skripal in Salisbury, Russian Foreign Minister Sergey Lavrov said in an interview with the BBC.

On Saturday, Lavrov said that a Swiss laboratory detected traces of BZ, which has been used by the US and UK armies, in samples sent by the OPCW experts investigating the poisoning of Skripal.

"On Saturday, we presented a paper, which contains literally the conclusion of the Swiss laboratory in the city of Spiez… The Swiss laboratory report also said that in the first place they found BZ, which was, I think, invented in the United States in 1955 and was among the equipment of US and UK armies. And we asked OPCW, whom we trust, whether this is true or not that in addition to A234 there was also BZ discovered. And we are waiting a reply from OPCW, whom of course we trust, but we want trust and verify," Lavrov said.

Letter to Russian Embassy: Skripal Case Looks Like 'Smokescreen'
Also, Russian foreign minister said that the current situation in international relations is worse than it was during the Cold War-era of rivalry between the Soviet Union and the United States.

On Friday, UN Secretary-General Antonio Guterres said that "the Cold War is back" and that there were no safeguards and mechanisms to manage the risks that had existed in the past.

"I think it is worse, because during the Cold War there were channels of communication and there was no obsession with Russophobia," Lavrov said answering a question if the existing situation in international relations looked like a new Cold War. The Russian minister added that the number of communication channels had significantly decreased.

However, Russian Foreign Minister noted that Russia and the United States were not close to a direct military confrontation because of the recent Western countries' attack on Syria.

On April 14 morning, the United States, the UK and France launched missile strikes on a number of targets in Syria in response to the alleged chemical incident in the Damascus' suburb of Douma. According to the Russian Defense Ministry, over 100 cruise and air-to-surface missiles were launched, most of which were shot down by Syrian air defense systems.

"Well I don't think that was very close. I believe it was a situation created by very reckless behavior of our Western colleagues, who accused the Syrian government and us as allies of the Syrian government of applying chemical weapons against civilians without waiting for the OPCW to inspect the place," Lavrov said in an interview with the BBC's HARDtalk program.

"As the representatives of our military explained, the deconflicting channel was engaged all the time," he said.

Also Lavrov said that Russia would be ready to consider any assistance to the Syrian Armed Forces in order to help it deter any potential aggression following the recent attack on the Middle Eastern state.

Ex-US Envoy Explains Goals of Trump’s Strike on Syria
"[The Western attack] makes us convinced that whatever is required to help the Syrian army to deter aggression, we would be ready to consider it," Lavrov said when answering a question on whether Moscow had plans to supply Damascus with S-300 air defense systems.

"[Russian] President [Vladimir] Putin addressed this issue. He reminded that a few years ago at the request of our partners we decided not to supply S-300s to Syria. Now as this outrageous act of aggression was undertaken by the United States, France and the United Kingdom, we might think how to make sure that the Syrian state is protected," the minister added.