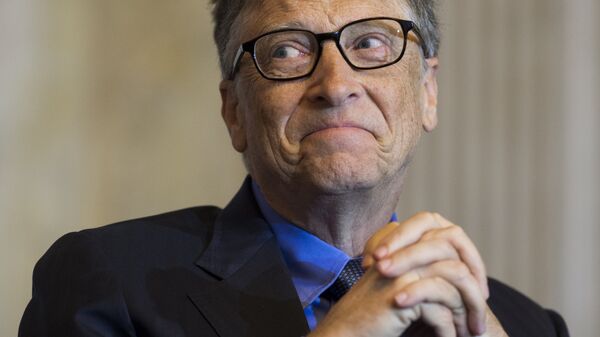 India’s influential right-wing fringe group Swadeshi Jagran Manch (SJM) has argued that the Bill and Melinda Gates Foundation's national director for India, Nachiket Mor, cannot simultaneously be a board member of the Reserve Bank of India, as the foundation serves questionable agendas.

New Delhi (Sputnik) — The Swadesh Jagaran Manch (SJM), which is affiliated with the Rashtriya Swayamsewak Sangh (RSS) — the parent organization of the ruling Bharatiya Janta Party (BJP), has written to Prime Minister Narendra Modi demanding the removal of Nachiket Mor, the national director of the Bill and Melinda Gates Foundation India, from his position as a board member of the Reserve Bank of India (RBI). The SJM has argued that retaining Mor on  RBI's board would result in a "conflict of interest," as his principle employer, BMGF, receives foreign funds while RBI is the country's fund regulator.

The Indian government had approved Nachiket Mor's reappointment as a member of the eastern local board of the federal bank and nominated him to RBI's central board last August.

"The Home Ministry is keeping vigil because of the allegations that the Foundation is working in favor of multinational companies by influencing government policies relating to health and agriculture. The fact that BMGF is functioning in India with RBI's permission makes this glaring case a conflict of interest," Ashwani Mahajan, the All India Co-convener of SJM, wrote to the prime minister.

"The activities of the foundation are suspicious. We request you to take stringent action, so that the message must go to all that they can't take India for granted," Mahajan had appealed to the prime minister in his letter.

Subramanian Swamy, a parliamentarian and former cabinet minister, said that he had raised the issue with the Indian government long ago.

Meanwhile, the SJM has cited media reports that allege that BMGF has been funding an NGO — Global Health Strategies or GHS — to market globally redundant vaccines to India.

In 2011, globally acclaimed academicians David Stuckler, Sanjay Basu and Martin McKee exposed BMGF's investment portfolio, exposing that a significant percent of BMGF's endowment was invested in private corporations that stood to gain from the foundation's philanthropic support of particular global health initiatives over others.

In the recent past, SJM also found GHS lobbying for wrong vaccines. "We request you to instruct the Home Ministry to widen their surveillance on BMGF and GHS — and probe their funding and source," the SJM wrote.