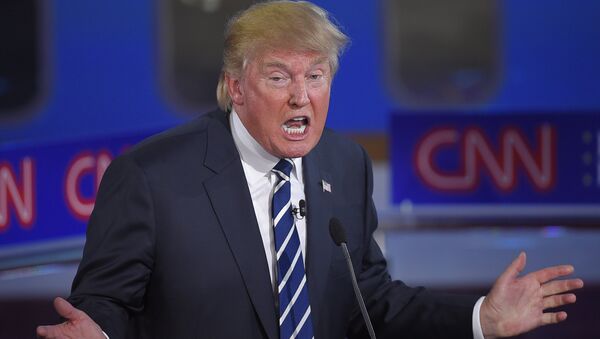 © AP Photo / Mark J. Terrill
Subscribe
A day after the US, joined by the UK and France, carried out a missile attack on Syria, Donald Trump took to Twitter to speculate on his previous "mission accomplished" wording, now completely outworn due to tons of predominantly critical remarks around the world. Trump, most naturally, has been singling out "fake news" media outlets.

"The Syrian raid was so perfectly carried out, with such precision, that the only way the Fake News Media could demean was by my use of the term "Mission Accomplished." I knew they would seize on this but felt it is such a great Military term, it should be brought back. Use often!" Trump tweeted.

The lion's share of users seem to ignore Trump's usual criticism of CNN, Fox News and other US mass media outlets and continue pondering the repercussions of the attacks.

Most traditionally, there are voices saying the only mission that was virtually accomplished was the one to divert the public attention from burning domestic issues:

A great many Internet users opted for a similar semi-humorous, semi-satirical approach as Trump himself did. One person repeated Trump's phrase, but inserted the word "impeachment."

impeachment is a great term that should be brought back: use more often!

its coming for him and he deserves it more than anything

There are, though, a great many America patriots online, who hurried to endorse Trump's move, one of them saying inaction would be evil.

“The only thing necessary for the triumph of evil is for good men to do nothing.”
— Edmund Burke

The world has been put on notice#MAGA #SyriaStrikes

The feeling is mutual, when things get accomplished. Thank you Pres Trump

However, this prompted an immediate backlash by another one, who pictured a horrid scenario in the wake of the US-led strike:

One user noted that fake news media outlets need to find something to attack, since "the precision" of the assault on Syria is "perfect."

Who cares if Trump said "Mission Accomplished" or not? The bottom line is we fired 105 missiles and every single missile struck it's target. The media doesn't like that. They had to find SOMETHING to attack! They can't ever just be happy for America!

Hordes of people remarked on the ridiculous and embarrassing gesture Trump makes when speculating upon his own orders, which they say is childish:

SAD son of a bitch, you act like a five year old not to mention your vocabulary is like that of a 2 year old.

Do you know, Donald, that it is possible for you to carry out a task, and NOT simultaneously brag about yourself and attack others in a Tweet about it, right?
Like you are aware of how much you sound like a child, right?

Many note that silence is essentially gold:

The loudest voice tends to be the most guilty one.
Wise words from my parents.

But what is most outstanding about the comments below Trump's tweet, is a wealth of hilarious Photoshopped memes:

America is so ready for THIS 👇🏼👇🏼👇🏼👇🏼👇🏼
The only #MissionAccomplished sign we want to see#MuellerIsComing pic.twitter.com/FoqT2BUw1C

In the early hours of April 14, the United States, the United Kingdom and France launched joint missile strikes on Damascus in response to the alleged chemical incident in the city of Douma, while blaming Bashar al Assad. According to the Russian Defense Ministry, an estimated 103 cruise and air-to-surface missiles were fired, most of which were intercepted by Syrian air defense systems. Three people reportedly sustained injuries in the attack.

000000
Popular comments
What's the difference between Trump and a hippo? None. Both enjoy living in a swamp.