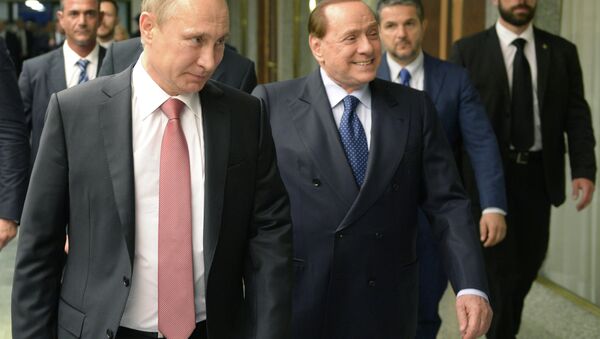 © Sputnik / Aleksey Nikolskyi
/
Go to the photo bank
Subscribe
ROME (Sputnik) - Russia's involvement in the settlement of the conflict in Syria allowed to avoid the repeat of the Libyan scenario, former Italian Prime Minister Silvio Berlusconi said Sunday, adding that Moscow's assistance led to greater stability and peace in the country than proxy wars.

"Direct involvement of Russia in Syria allowed to avoid what happened in Libya with Gaddafi: the tragic mistakes of the West, under those circumstances, led to a catastrophe, with the Libyans immersed in bloody chaos, and us, Italians, who have become victims of the new flows of illegal migration that our government was able to block due to agreements with Gaddafi, paying the price for its consequences," Berlusconi said in an op-ed piece for the Corriere della Sera newspaper.

The politician stressed that the situation in Syria proved the inaccuracy of hasty and generalized judgments: for example, not all enemies of Syrian President Bashar Assad are friends of the West and freedom.

Berlusconi also noted that the Syrian leader had ensured such a level of secularism and respect for the rights of minorities, which can rarely be found in the Middle East.

"That is why we cannot simplify judgments: Russia's presence in Syria, for example, led to greater stability and peace in the country that was about to explode, while — regardless of good intentions — 'proxy wars' and support for insurgent groups by arms supplies contributed to the strengthening of the IS [Daesh]* and other terrorist groups associated with al-Qaeda*," the politician wrote.

In conditions when the actions of Assad are influenced exclusively by the Russian leadership, which risks becoming the target of new restrictive measures imposed by the West, the new Italian government, based on the experience of the agreements of Pratica di Mare 15 years ago, should assume the role of mediator in relations between the West and Russia, Berlusconi stressed.

According to the politician, the role of the United Nations in recent years has faded to such an extent that many ask whether it still has meaning as an international organization of this kind.

In this regard, the decision for a new Syrian political structure requires the deployment of a "multinational unit of blue helmets," which was necessary in situations that seemed hopeless — from Lebanon to the former Yugoslavia — the former prime minister said.

Western countries should consider Moscow as a strategic partner, not an enemy, he added.

"I still believe, as a Westerner who loves America and Europe, that [Russian President Vladimir] Putin's Russia should be viewed as a strategic partner, not as an adversary. This does not mean that there cannot be different opinions or opposing interests, which means that these differences should be resolved through agreements, not through conflict with Moscow," Berlusconi concluded.

US Media Releases PHOTO Allegedly Proving 'Successful' Missile Strike in Syria
Libya has been in a state of turmoil since 2011 after US-backed Islamic rebels toppled the country’s government and killed its leader Muammar Gaddafi. Since then, Libya’s tribes and political factions have been fighting for supremacy, but the power vacuum has enabled a foothold for the IS and other terrorist groups.

The country’s eastern regions are governed by the elected parliament backed by the Libyan National Army. The Government of National Accord (GNA), formed with the support of the United Nations and Europe and headed by Prime Minister Fayez Sarraj, operates in the country’s west, including the Libyan capital of Tripoli. The Tobruk parliament does not support the UN-backed government in Tripoli.