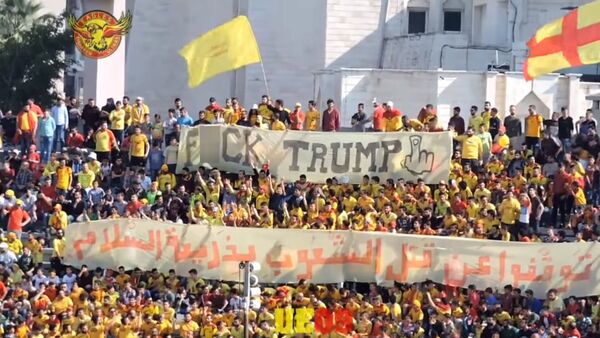 After US-led coalition members hit Syria with over 100 missiles last Friday, the fans from the Syrian Tishreen Football Club pulled no punches while expressing their attitude toward the US administration's recent actions.

The fans unfolded a banner reading "F**ck Trump" in a message to Washington calling on it to stop killing the Syrian people on the pretext of establishing "peace."

Donald Trump ordered on Friday a massive missile strike against Syrian targets in response to the alleged chemical attack in the city of Douma in the Damascus suburb. Jointly with the United Kingdom and France, the United States had launched 103 missiles, 71 of which were intercepted by Syrian air defense systems. According to the Syrian authorities, which have repeatedly said that they had destroyed their chemical weapons stockpiles, the strikes damaged Syrian infrastructure and left three civilians wounded.

Russian President Vladimir Putin has said that the attack had been conducted illegally.