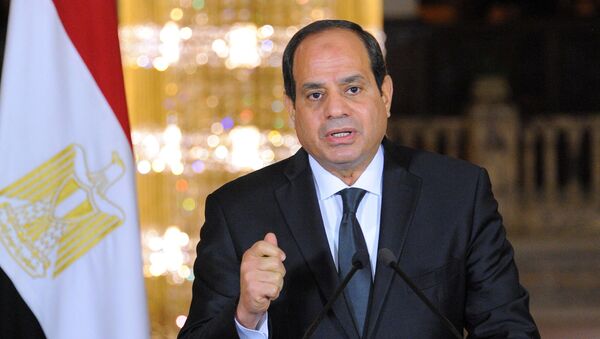 The summit of the Arab League took place on Sunday in the Saudi city of Dhahran amid an escalation of the situation in Syria after US-led strikes on the country.

"Egypt opposes the use of any types of prohibited weapons on Syrian territory. In connection with this, we call for an international and transparent investigation using internationally recognized tools," the Egyptian president said in his welcoming speech at the Arab League summit.

Cairo is monitoring the escalating military tension in Syria with deep concern, Sisi said, adding that such a situation could threaten agreements on de-escalation zones.

The views of the Arab states on the US-led attack differ sharply: Qatar, Saudi Arabia, and other members of the Gulf Cooperation Council (GCC) supported the attacks, while Lebanon, Algeria and Iraq condemned them. The Iraqi Foreign Ministry called on the Arab League to work out a clear position in response to missile strikes by the United States and its allies on Syria in the course of the summit.

Russian Engagement Helped Avoid Libyan Scenario in Syria - Berlusconi
On Friday night, the United States, France and the United Kingdom launched strikes on a number of targets in Syria in response to the alleged chemical incident in the Damascus' suburb of Douma. The Western states have accused forces of Syrian President Bashar Assad of an attack with the use of chemical weapons in Douma. The Syrian leadership denied any involvement in the attack, and invited the experts from the Organization for the Prohibition of Chemical Weapons (OPCW) to investigate into the reports.

000000
Popular comments
What? will an investigation prevent the US,. UK and France from bombing Syria? What if they learn the White Helmets use the Gas and not Syria? Will the US, UK and France leave Syria?