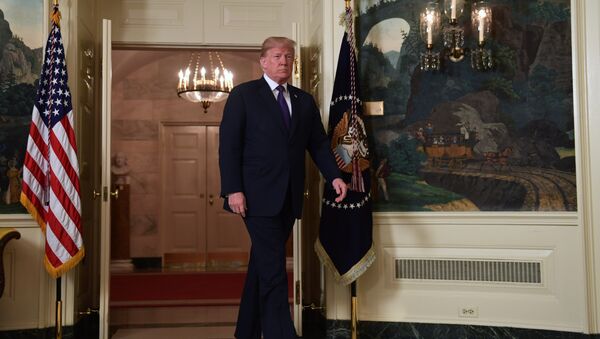 The strikes are meant to deter further chemical attacks, Trump said, announcing that US missiles were heading to strike targets related to chemical weapons depots. The operation, which featured B-1B bombers, targeted sites near Damascus and Homs.

The US, UK and France have said they would work concert on the "international response" against Syrian President Bashar al-Assad for the alleged use of chemical weapons in Douma.

​Syrian air defenses were activated in response, and massive explosions were heard in Damascus, according to social media reports.

"We are prepared to sustain this response" until Assad halts use of chemical weapons, Trump said, but "America does not seek an indefinite presence in Syria, under any circumstances." Defense Secretary James Mattis clarified one hour later at a briefing this was a "one-time" strike.

"The fate of the region lies in the hands of its own people," he said.

The strikes are a "direct result" of Russia's inability to keep Assad from using chemical weapons, the "crimes of a monster."

​UK Prime Minister Theresa May said British armed forces have been authorized to "degrade" Syria's chemical weapons capability. "I have done so because I judge this action to be in Britain's national interest," she said.

Everyone who warned that Bolton would advocate for totally idiotic Mideast policies turned out being clairvoyant geniuses.

Trump did not specify what military aims the US has. Congressional leadership has not authorized strikes, but was notified of the attack. Of course, the US Constitution requires Congressional approval for actions of war, but this mandate was disregarded Friday night.